If you’re interested in developing an EB-5 project based in San Francisco, the EB5 Affiliate Network (EB5AN) State of California Regional Center, approved by United States Citizenship and Immigration Services (USCIS), covers all of San Francisco, including Chinatown, Downtown-Union Square, and the surrounding neighborhoods that make up the city.

Contact EB5AN for guidance on affiliating your San Francisco–based EB-5 project with our California regional center.

The EB5AN EB-5 regional center for California covers not only all of San Francisco but also the entire Golden State. Becoming an affiliate of EB5AN will allow you to start raising capital for your project in San Francisco right away. For a complete list of USCIS-approved EB5AN regional centers, visit the USCIS website.

USCIS requires EB-5 projects to create 10 new jobs per investor for immigrant petitions to be successful. This goal is difficult to reach when only direct payroll employees can be counted. EB-5 projects that are affiliated with any one of EB5AN’s approved regional centers are also allowed to include indirect jobs in that job count, which means they have the potential to create a higher number of jobs and thus collect capital from more investors.

We will make your affiliation with EB5AN as simple and painless as possible. Our team of EB-5 experts will help you figure out how many jobs your project is projected to create, how much EB-5 capital you should aim for, and whether your projects meets the requirements to affiliate with our regional center in San Francisco, CA. We’ll expedite the regional center affiliation process, so you can begin raising capital right away.

Interested in creating your own regional center? We’ll help you finish your I-924 application in a mere three weeks.

EB5AN has extensive experience with I-924 applications, having already completed over 300 business plans and economic impact studies related to projects spanning more than 20 states. We’ll help you avoid common errors and ensure that you understand all the legal, economic, and business aspects of the form. Our excellent track record means we can handle any issues that may arise during the application process.

Contact us to get started with your I-924 application. We will be happy to answer any questions you may have, and we guarantee a response within 24 hours.

Because targeted employment area (TEA) designation holds numerous benefits for EB-5 projects in San Francisco and other cities, it is important to understand both the benefits of and the USCIS process for TEA designation. To determine whether your EB-5 project location falls within a TEA, please consult our free EB-5 TEA map, which includes data for the entire United States. All you need to do is to enter the project address—the rest of the process is automated.

If you confirm that your EB-5 regional center is located in a TEA in San Francisco, you can also use the EB5AN TEA map to instantly download a free TEA Qualification Report that shows all the data and calculations that support TEA qualification for your project location. Should you have any questions or concerns, don’t hesitate to contact the EB5AN team by phone at 1-800-288-9138 or via e-mail at info@EB5AN.com. We promise to respond within 24 hours.

The city of San Francisco is flourishing.

EB5AN’s State of California Regional Center offers foreign investors the opportunity to invest through an approved EB-5 regional center that covers all of San Francisco, including the nearby areas of Los Altos Hills, Hillsborough, and Loyola, and thereby become permanent residents of the United States. Our regional center has full coverage of the City by the Bay in San Francisco County. 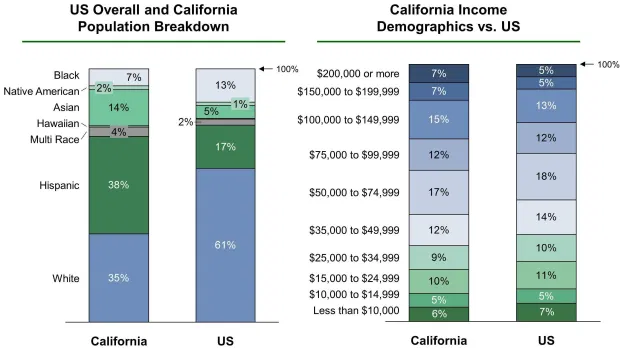 San Francisco, with its population density of 18,569 people per square mile, is the eight-most densely populated city in the entire United States. This means that affiliating with EB5AN’s State of California Regional Center will provide sorely needed employment opportunities in your community.

For more information on how regional center affiliation works, contact us today. We are also available by phone at 1-800-288-9138 or e-mail at info@EB5AN.com.