Are you are interested in affiliating with EB5 Affiliate Network (EB5AN) to manage your NYC EB-5 project? Contact EB5AN to learn what to expect and how to affiliate your EB-5 project.

The Benefits of Affiliating with EB5AN’s New York Regional Center

Why choose affiliation with our EB-5 regional center over heading out on your own?

1. Affiliation with EB5AN will give you faster access to needed capital.

EB5AN is a reputable, national consulting firm with numerous regional centers throughout the U.S. All our centers are approved by United States Citizenship and Immigration Services (USCIS) and appear on its list of approved regional centers. Since our New York EB-5 regional center has a geographic coverage area that includes the entire state of New York, you can start raising EB-5 investment capital for your New York City EB-5 project right away, regardless of where in the city your project is located.

2. Projects that are affiliated with a regional center can include indirect jobs in their total job creation count.

One of the major disadvantages of unaffiliated EB-5 projects is that only direct employees can be included when counting newly created jobs. Affiliation with a regional center adds the option of including indirect jobs, which makes it easier to meet the job-creation requirements and allows for higher amounts of EB-5 capital.

3. You can get the needed expertise and assistance to launch your project quickly.

If you’re in a hurry to get your project started, our team members have the experience necessary to rapidly guide you through the EB-5 regional center affiliation process. We can look over your project details to get an idea of the number of eligible jobs your project will create, the amount of EB5 investment capital it can handle, and whether it is eligible to affiliate with our regional center.

If you’re interested in getting approval for your own EB-5 regional center in New York City, we can help you get your I-924 application submitted in under three weeks.

Filling out the I-924, Application for Regional Center Designation Under the Immigrant Investor Program, can be a complicated and time-consuming process. The regional center application process can be simplified and expedited with the assistance of experts in its legal, economic, and business aspects. EB5AN has extensive experience with helping new applicants meet the application requirements and guiding them through to the completion of the adjudication process. EB5AN has regional centers with geographic coverage of over 20 states and has successfully finished more than 300 USCIS-compliant business plans and economic impact studies.

For more information on how we can expedite your EB-5 regional center application, contact our team, and we’ll get back to you within 24 hours.

Because targeted employment area (TEA) designation holds numerous benefits for EB-5 projects in New York and other cities, it is important to understand both the benefits of and the USCIS process for TEA designation. To determine whether your EB-5 project location falls within a TEA, please consult our free EB-5 TEA map, which includes data for the entire United States. All you need to do is to enter the project address—the rest of the process is automated.

If you confirm that your EB-5 regional center is located in a TEA in New York City, you can also use the EB5AN TEA map to instantly download a free TEA Qualification Report that shows all the data and calculations that support TEA qualification for your project location. Should you have any questions or concerns, don’t hesitate to contact the EB5AN team by phone at 1-800-288-9138 or via e-mail at info@eb5an.com. We promise to respond within 24 hours.

New York City is the main economic center for the State of New York and the United States as a whole.

New York City draws visitors from all over the world. Many tourists come to see its famous attractions, such as the Statue of Liberty; others come to attend one of its reputable universities, New York University and Columbia University. As a center of immigration, New York has also actively endorsed the EB-5 Regional Center Program for potential immigrant investors. 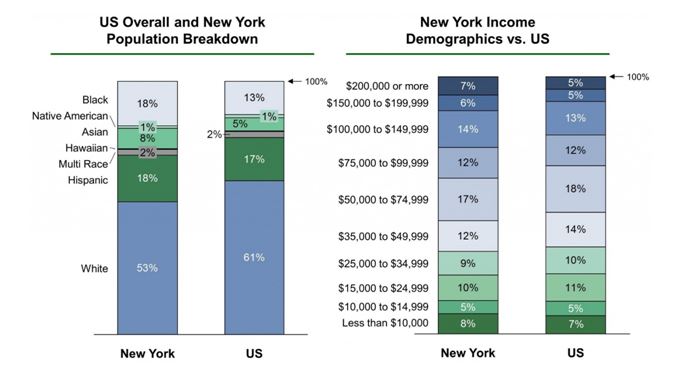 Considering the large population of New York City, creating full-time jobs would be highly beneficial to the area. Affiliating with EB5 Affiliate Network to launch your EB-5 project will maximize the job opportunities you can create in the city.

Don’t wait any longer—contact EB5AN for more information about getting your own USCIS-approval for a new EB-5 regional center or affiliating with one of EB5AN’s approved regional centers.