A recent independent survey of ~300 wealthy Chinese investors interested in immigration programs revealed the key criteria they use to evaluate immigration opportunities. The results from the survey focused on Western countries and highlighted the most important aspects of each immigration option. The key takeaways highlight the benefits wealthy Chinese families receive from immigration far outweigh the cons. The below content illustrates the key data surrounding the top immigration destinations,  reasons for immigration, key cities in China, and the various wealth levels of the surveyed individuals.

For Chinese nationals, the U.S., UK, and Canada still rank as the most sought after immigration destinations according to a recent independent study of Chinese high-net-worth individuals. Australia, Singapore, and Germany followed close behind, with Hungary and Portugal coming in 9th and 10th place, respectively. Unsurprisingly, education was cited as the most heavily weighted criteria for immigration, followed by opportunity for real estate investment and complexity of immigration policy. The U.S. ranked highest in education, real estate investment, immigration policy, passport access, and adaptability but lower in taxes and medical treatment. 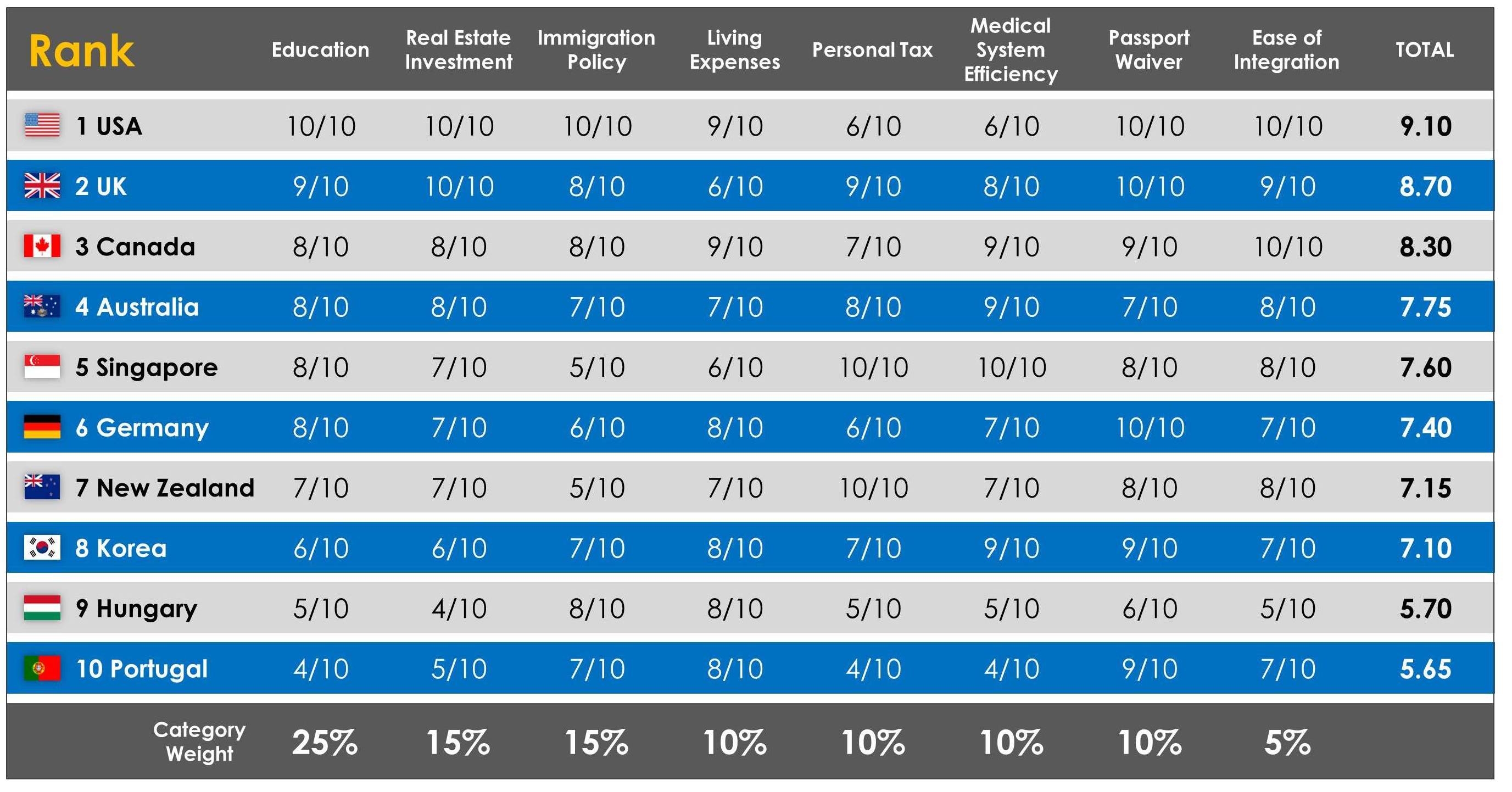 U.S. citizenship carries many benefits for foreign nationals. The U.S. passport, for example, provides access to more than 170 countries without the need for a visa. Immigrants can pay in-state tuition for access to public education or attend world-class public research universities like the University of California, Berkeley, or the University of California, Los Angeles. 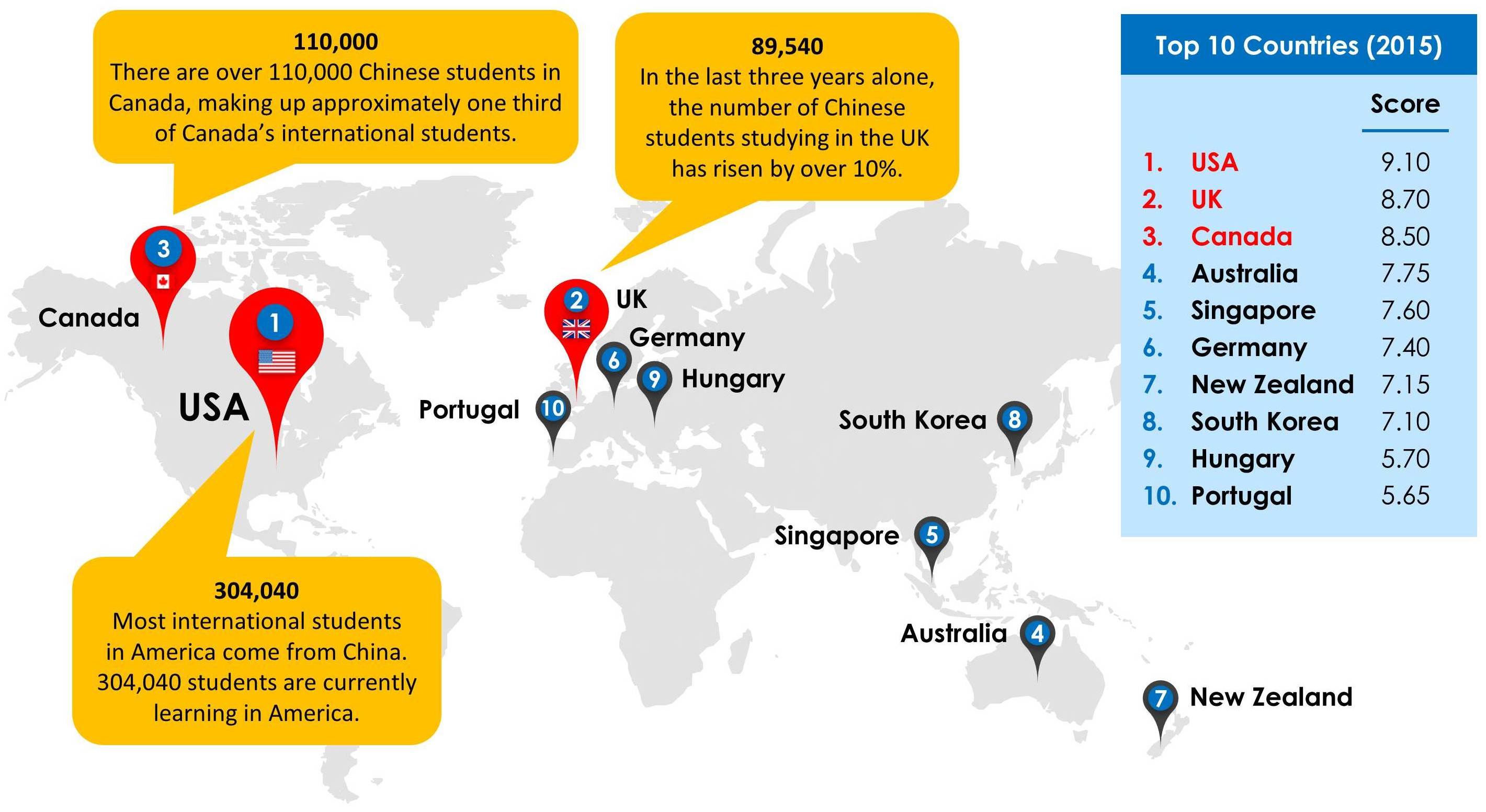 International students continue to flock to the U.S., UK, and Canada in droves. Of the 820,000 international students currently attending U.S. colleges and universities, an estimated 300,000 come from China. The U.S. has the best university system in the world, boasting prestigious schools like Harvard, Princeton, Yale, and Stanford. Most foreign nationals who hope to send children abroad for better education will choose the U.S. Canada is also highly attractive to immigrants seeking education for their children.

Reasons for Becoming a Global Citizen 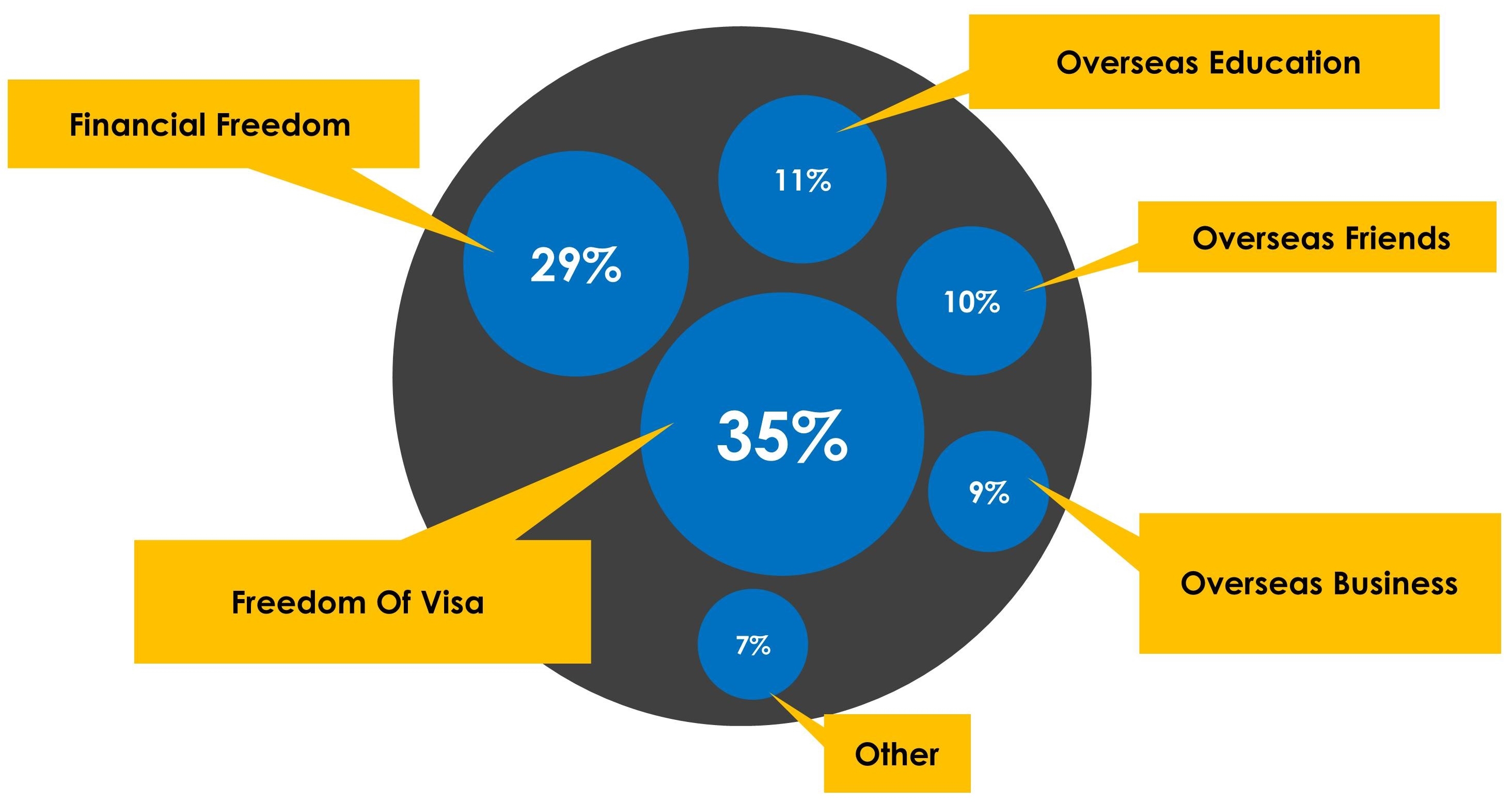 Overseas education was another important factor cited in the study. The top education destinations for Chinese nationals – the U.S., UK, and Canada – boast prestigious colleges and universities and high populations of international students.

Minimum Net Worth for Financial Stability 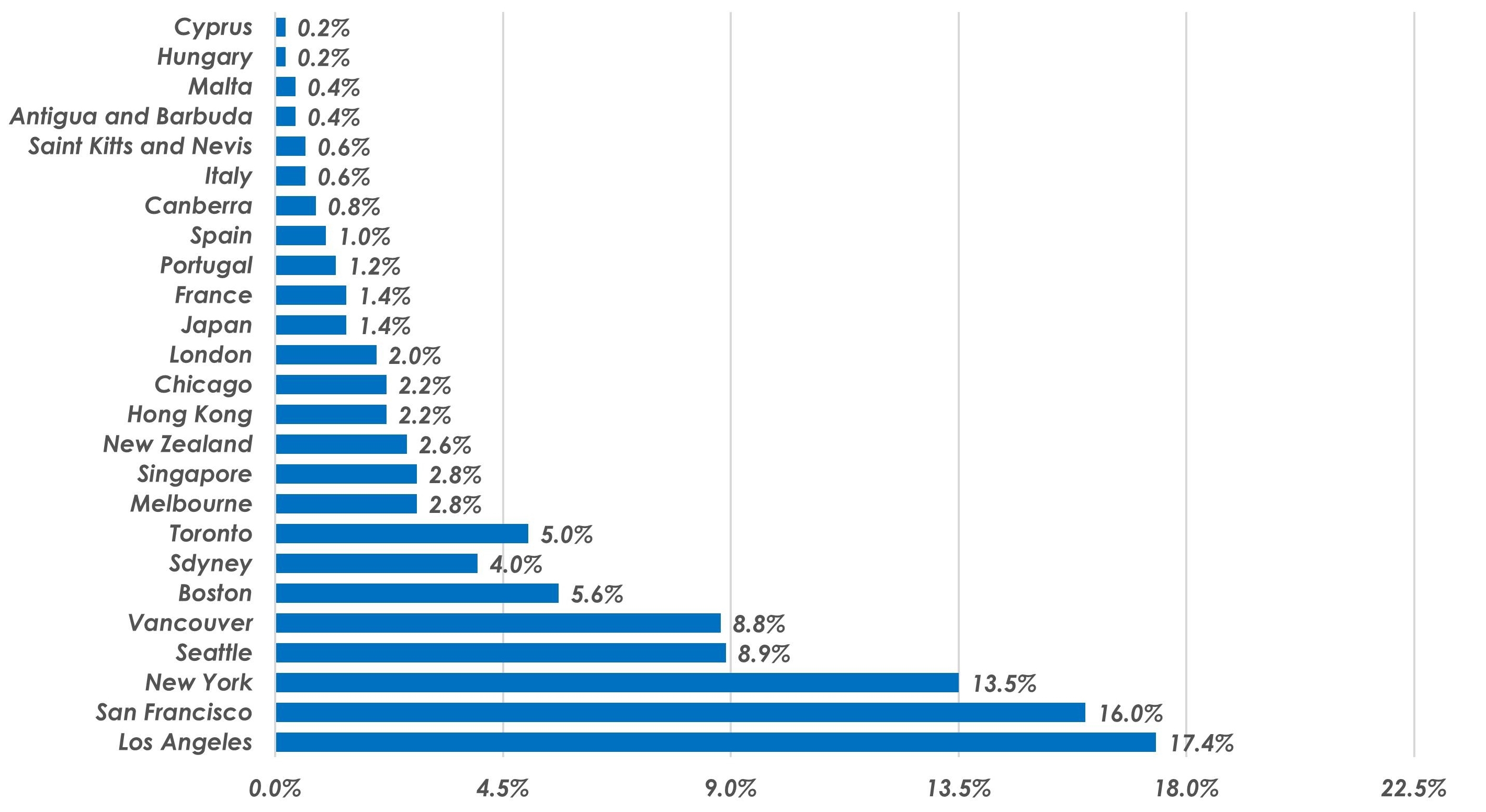 Los Angeles is home to large populations of high-net-worth Chinese nationals, who live in suburbs like Rowland Heights, Arcadia, and Hacienda Heights. The sunny weather, abundant space, and high density of Asian immigrants has made Los Angeles suburbs a top immigration destination for Chinese nationals and their children. The inflow of investment has driven up real estate prices and led to rapid construction of luxury homes targeted specifically at Asian buyers.

Canada and Australia also boast cities in the top 10 immigration destinations, including Vancouver, Sydney, Toronto, and Melbourne. Surprisingly, only one Asian country – Singapore – ranked in the top 10.

Top 10 Most Important Cities for Culture and Business 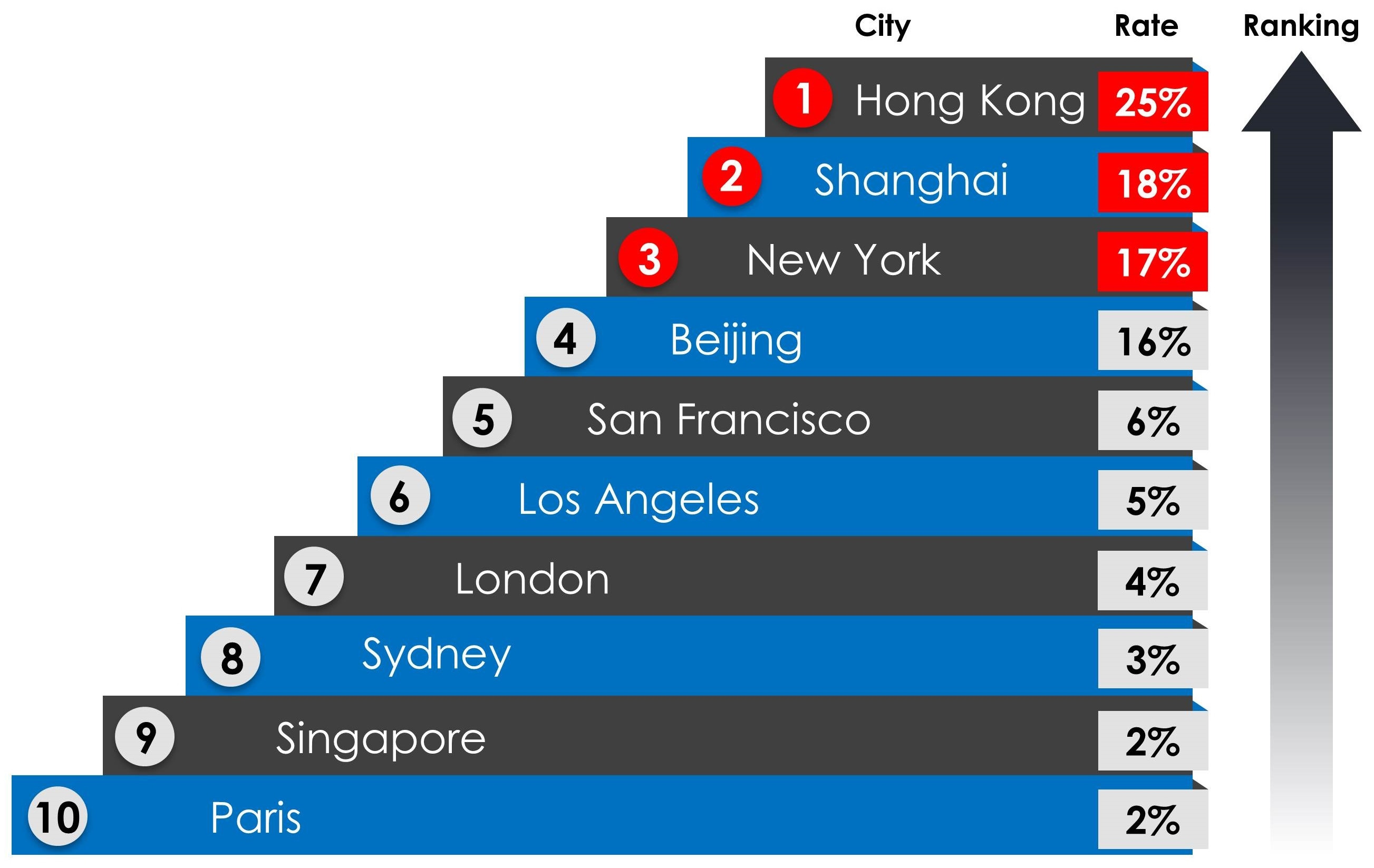 Beijing, San Francisco, and Los Angeles were also important cities for culture and business. Beijing is one of the most populous cities in the world with more than 21 million inhabitants and is home to offices of the central government, state owned enterprises, and historical sites. San Francisco boasts a vibrant technology and startup scene as the heart of Silicon Valley. Los Angeles attracts millions of tourists each year to visit Hollywood and its large film, entertainment, and fashion industries.

Factors Affecting Wealth and Quality of Life in China 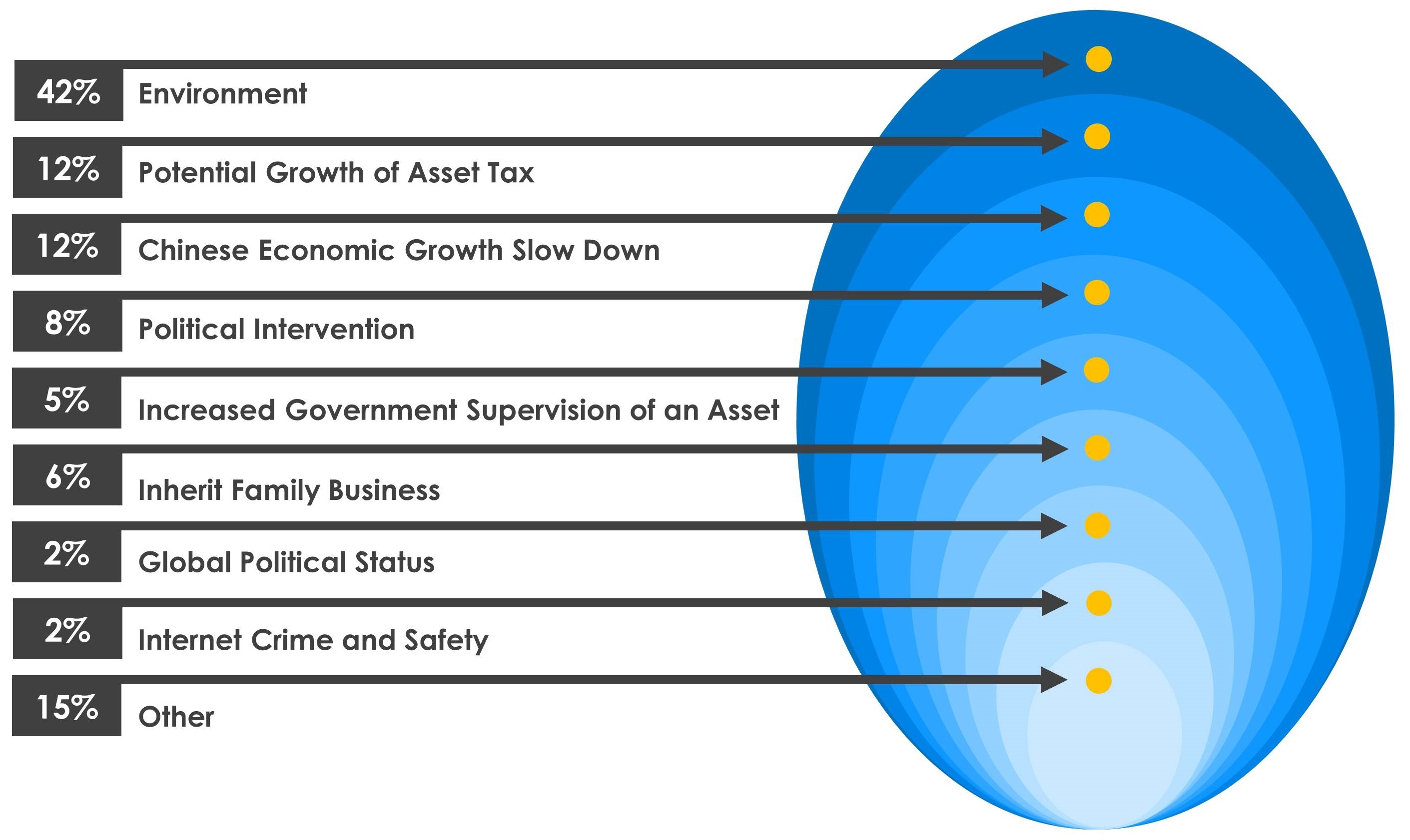 Chinese nationals cited a variety of serious factors that negatively impact quality of life in China. Chief among them was the environment and pollution in China’s major cities. Air quality was one of the top concerns voiced by the Chinese public to politicians in this year’s political elections. The inhabitants of Beijing, known for its thick smog, are forced to wear masks and stay indoors most days, which makes many outdoor activities impossible. Chinese parents, out of a desire to provide a healthier and better environment for their children, are seeking to raise their children elsewhere.

Economic considerations continue to be another major push factor for Chinese immigrants. Concerns about an economic slowdown, as well as a push for higher taxes on personal income, are pressuring high-net-worth individuals to move their capital elsewhere, despite China’s restrictions on moving money outside the country. 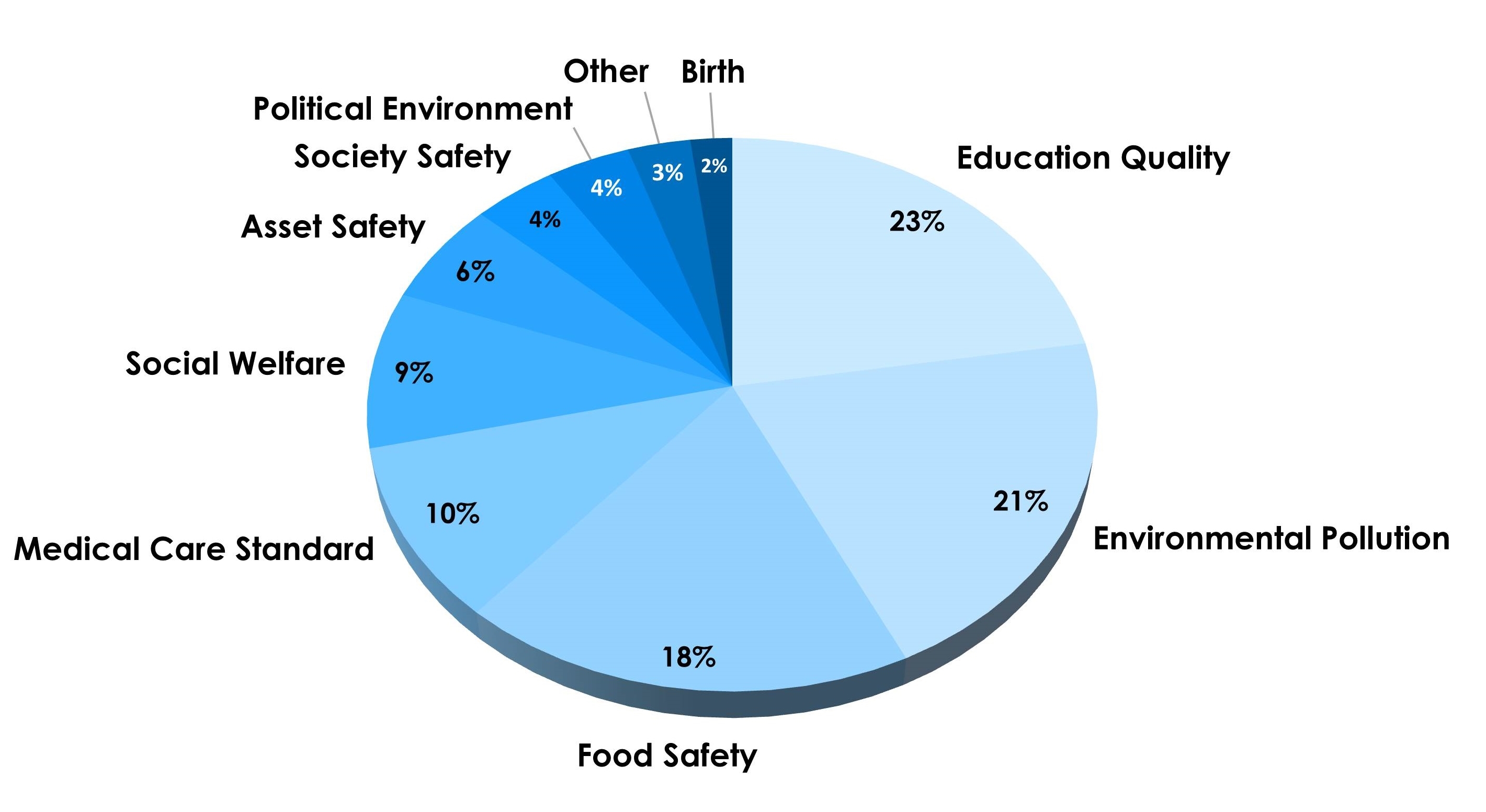 For high-net-worth individuals, the quality of education in the country of immigration was a chief concern. Although Chinese schools and universities are quickly gaining international recognition, many Chinese nationals still believe Western education at American and British schools is superior. The US boasts almost 2,000 public universities, including renowned universities like the University of California, Berkeley, and the University of California, Los Angeles.

Air and environmental quality was the 2nd most important concern for high-net-worth Chinese immigrants. Beijing, Shanghai, and other metropolitan cities in China are blanketed by thick smog daily, leading Chinese families to seek cities with clean air and a better environment. Food safety, medical care, and social welfare were also important considerations. Furthermore, as the Chinese economy slows down and as taxation and asset protection remain uncertain, wealthy Chinese seek the stability of countries like the US, Canada, and the UK.

Benefits and Drawbacks of Immigration 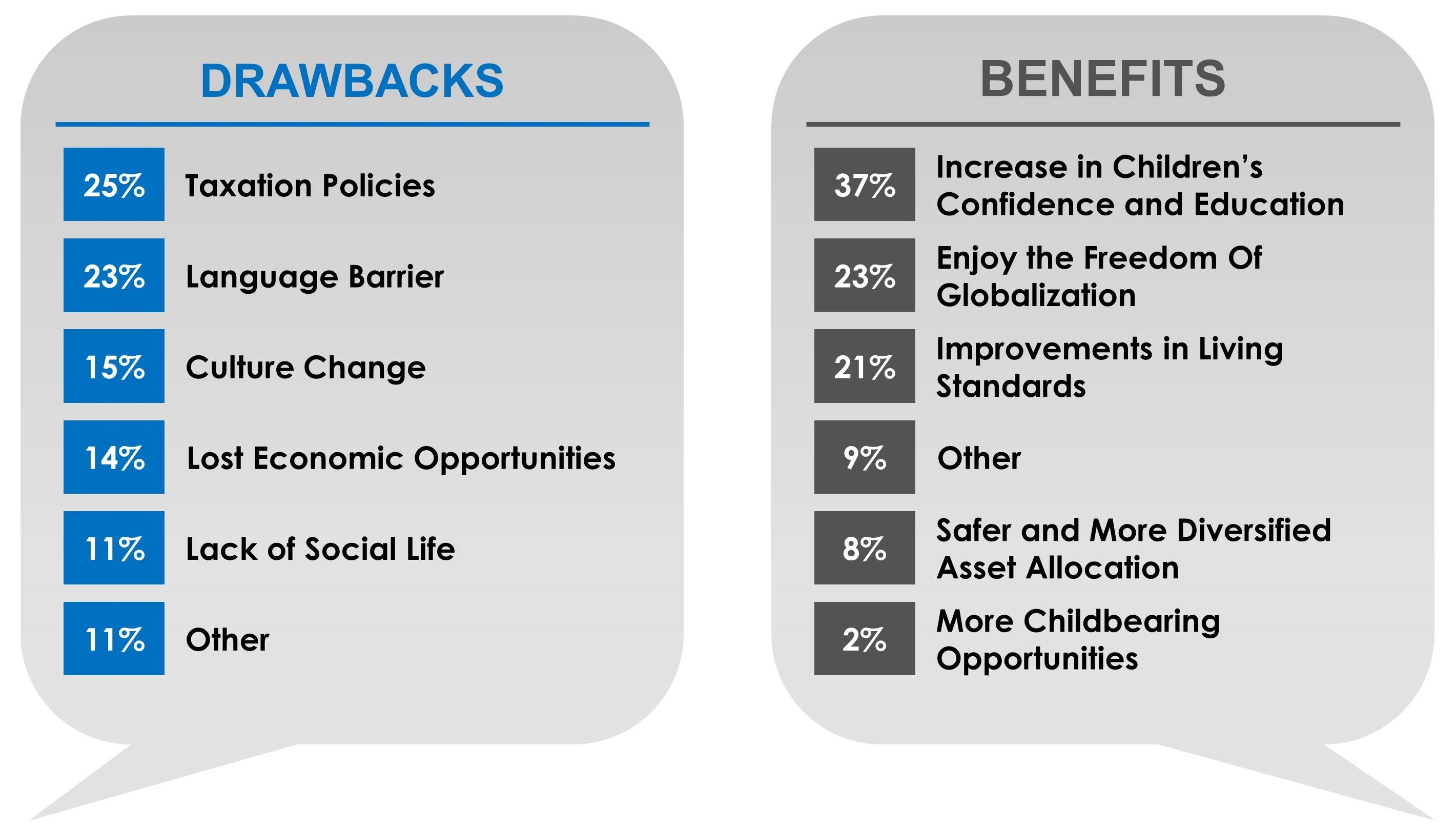 While many Chinese immigrants look to EB-5 as a ticket to better education, health, and real estate investment opportunities, immigrating to a new country can be very daunting for foreign nationals. Cultural shock, language barriers, and alienation from friends and family can make immigration a stressful experience for foreign nationals.

This survey of high-net-worth Chinese nationals revealed that taxation policies, language, and cultural change are the biggest drawbacks of immigration. In the U.S., for example, an individual’s worldwide income is still subject to U.S. taxes, which can be a major drawback of U.S. citizenship. Many of the benefits, however, like quality public education for children, freedom to travel the world, and a high standard of living, can more than offset the stressors of living abroad. The U.S. continues to see a persistent inflow of immigrants from many countries seeking a better, healthier life. 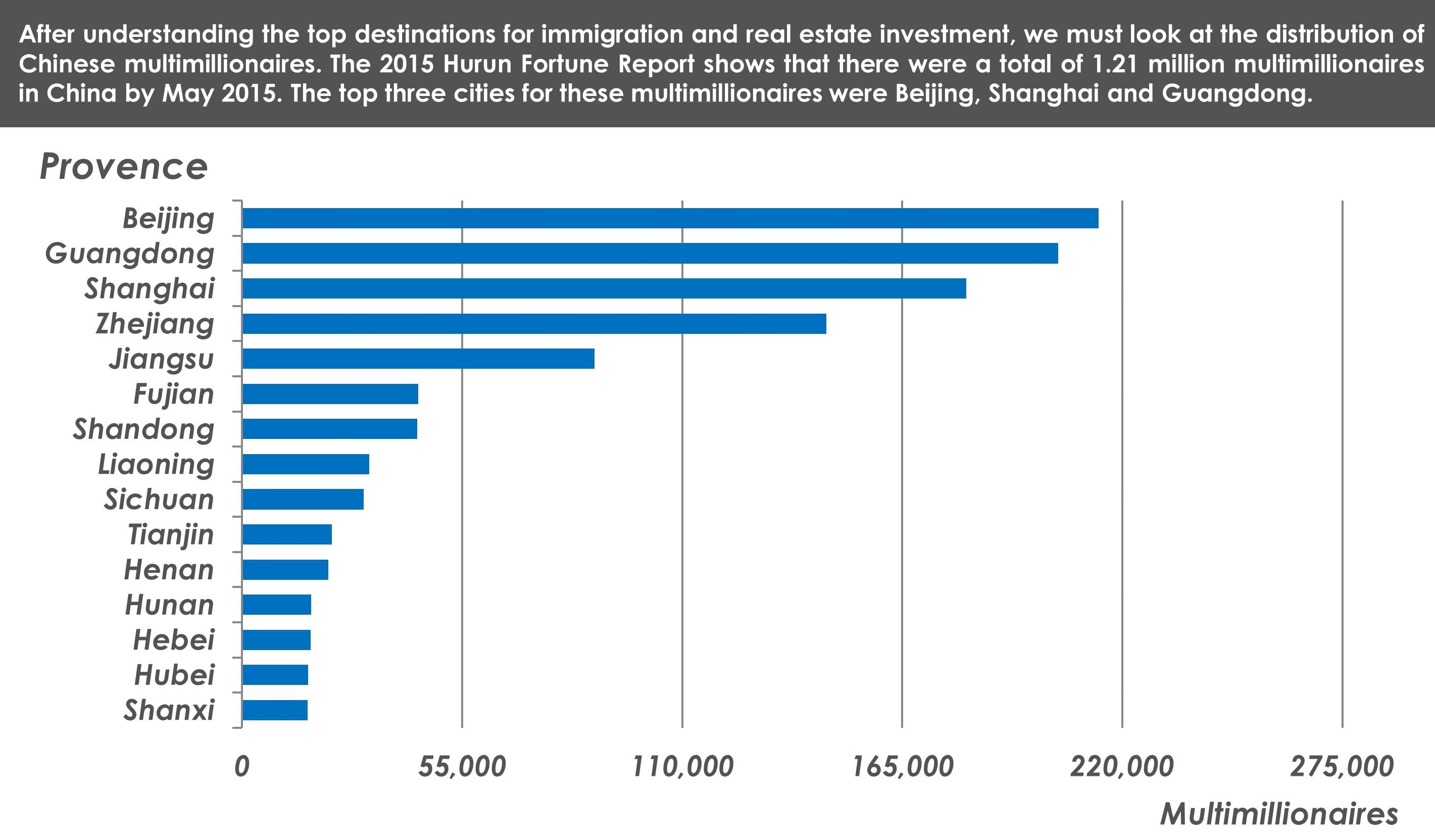 If you are a U.S. project developed looking to source investors from China, there is a good chance at finding them in one of the following 3 cities: Beijing, Guangdong, and Shanghai. A 2015 report found that 1.21 million multimillionaires live in China, and these top 3 cities accounted for 49.5% of them. The fact that these 3 cities have such an accumulation of high-net-worth individuals is not surprising. Guangdong, for example, is a major international finance and trade center and the most populous province in China, with 79.1 million permanent residents.

What multimillionaires in China lack, however, is the financial stability, global freedom, and asset protection that high-net-worth individuals in Western countries enjoy. Many wealthy Chinese nationals continue to actively seek promising investment opportunities in real estate, stocks, and companies in the U.S. and other countries as a means to diversify and protect their assets. 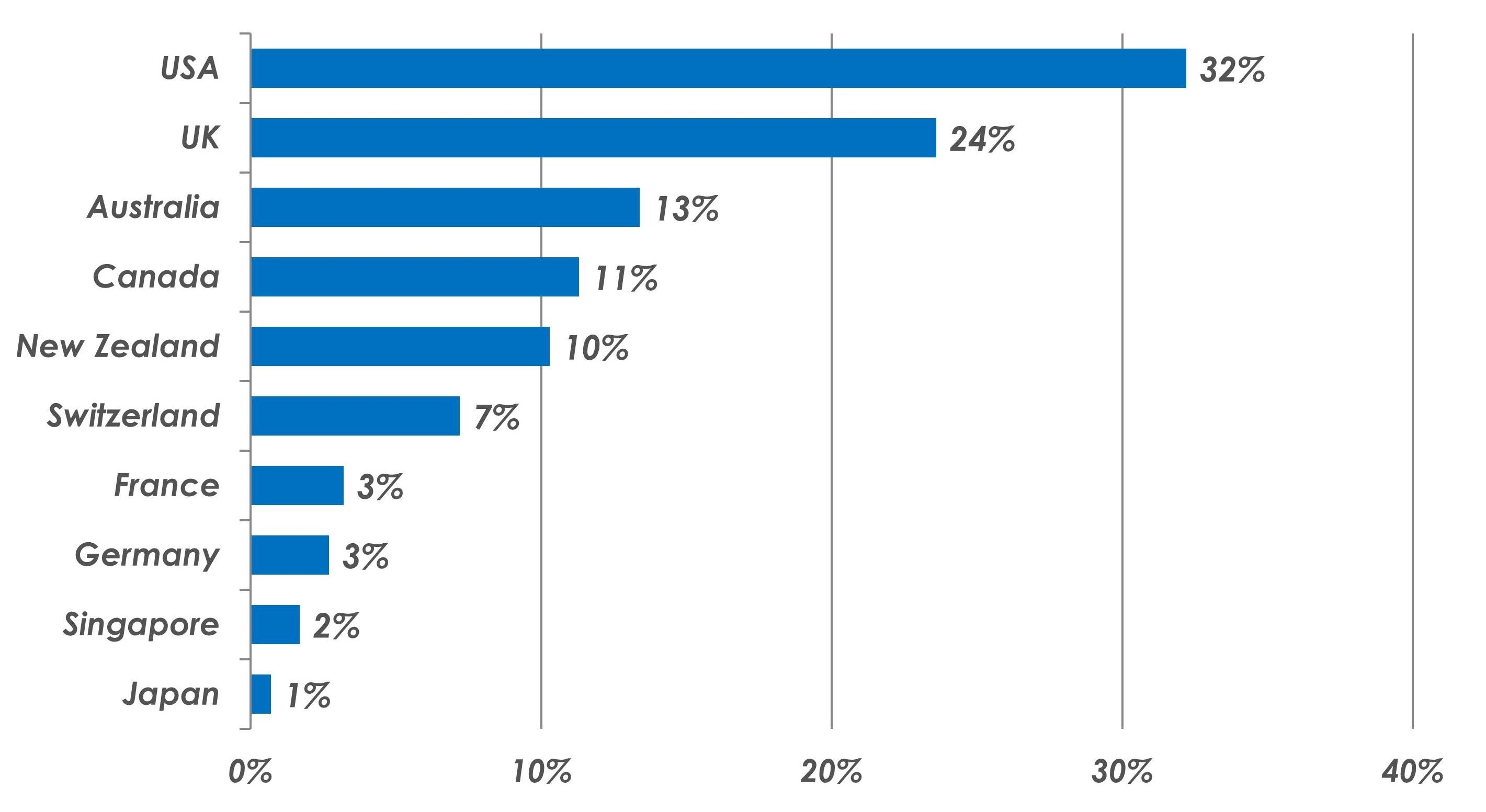 International students seem to overwhelmingly prefer studying abroad in the U.S., followed by other English-speaking countries like the UK, Australia, Canada, and New Zealand. Studying abroad can be an important investment made by Chinese parents on behalf of their children in order to provide them with quality education and the opportunity to learn in an unfamiliar and stimulating environment. Many companies tend to favor educational backgrounds at American institutions and resumes with experience at American companies. 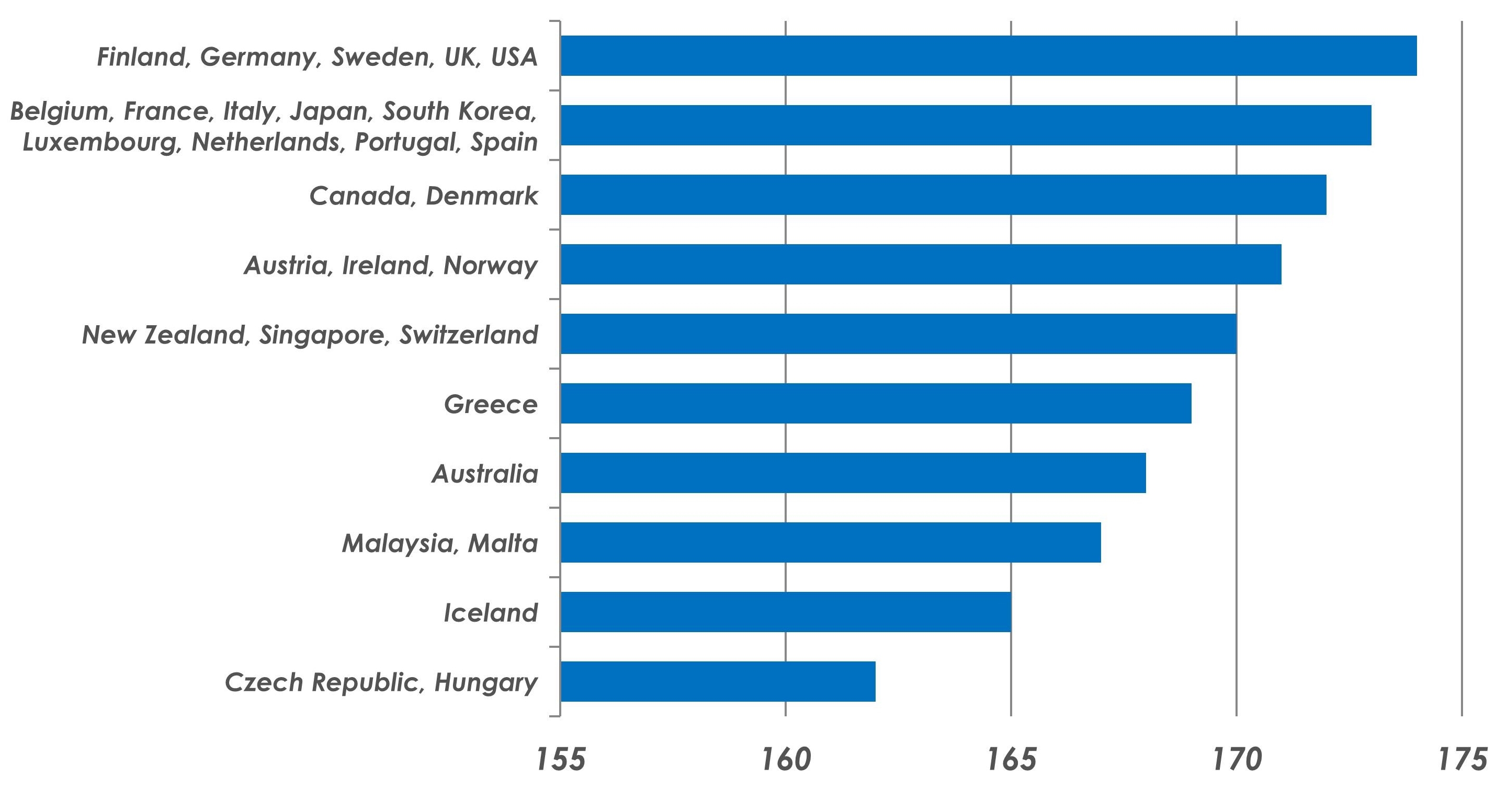 Chinese citizens who have traveled abroad know the inconvenience of applying for visas to the U.S. or other countries. Many visa application processes can involve intense interviews and screenings as well as significant delays. Getting a visa can be exhausting and time consuming. If you are a global traveler, having access to an American or British passport can be a very valuable, long-term investment. 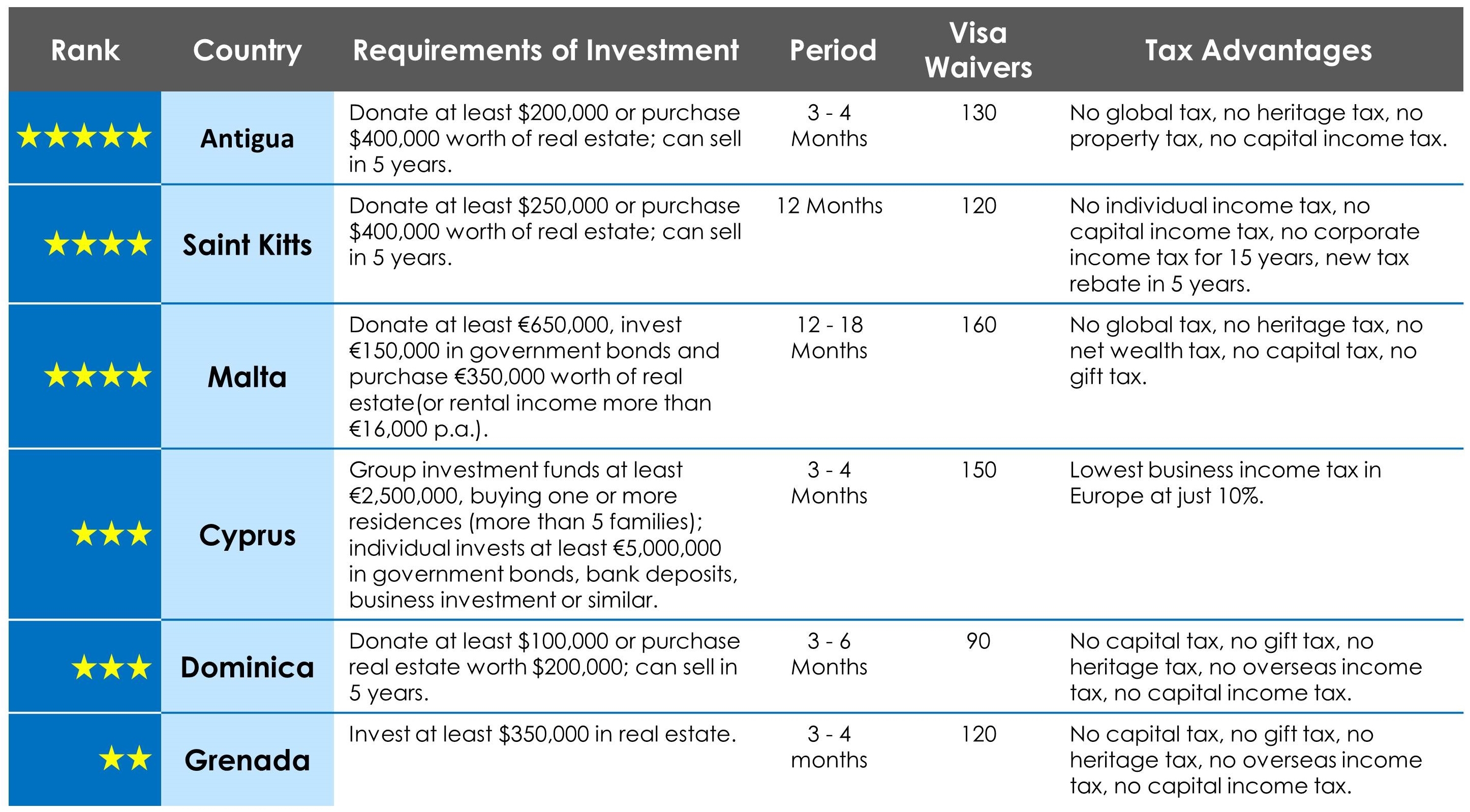 Tax havens, however, are not always in the best interest of every investor. Many have no desire to own property or assets in the Mediterranean or Caribbean, for instance, and instead prefer to invest money where they are sending their children for college. Still, the tax advantages of these island nations continue to attract 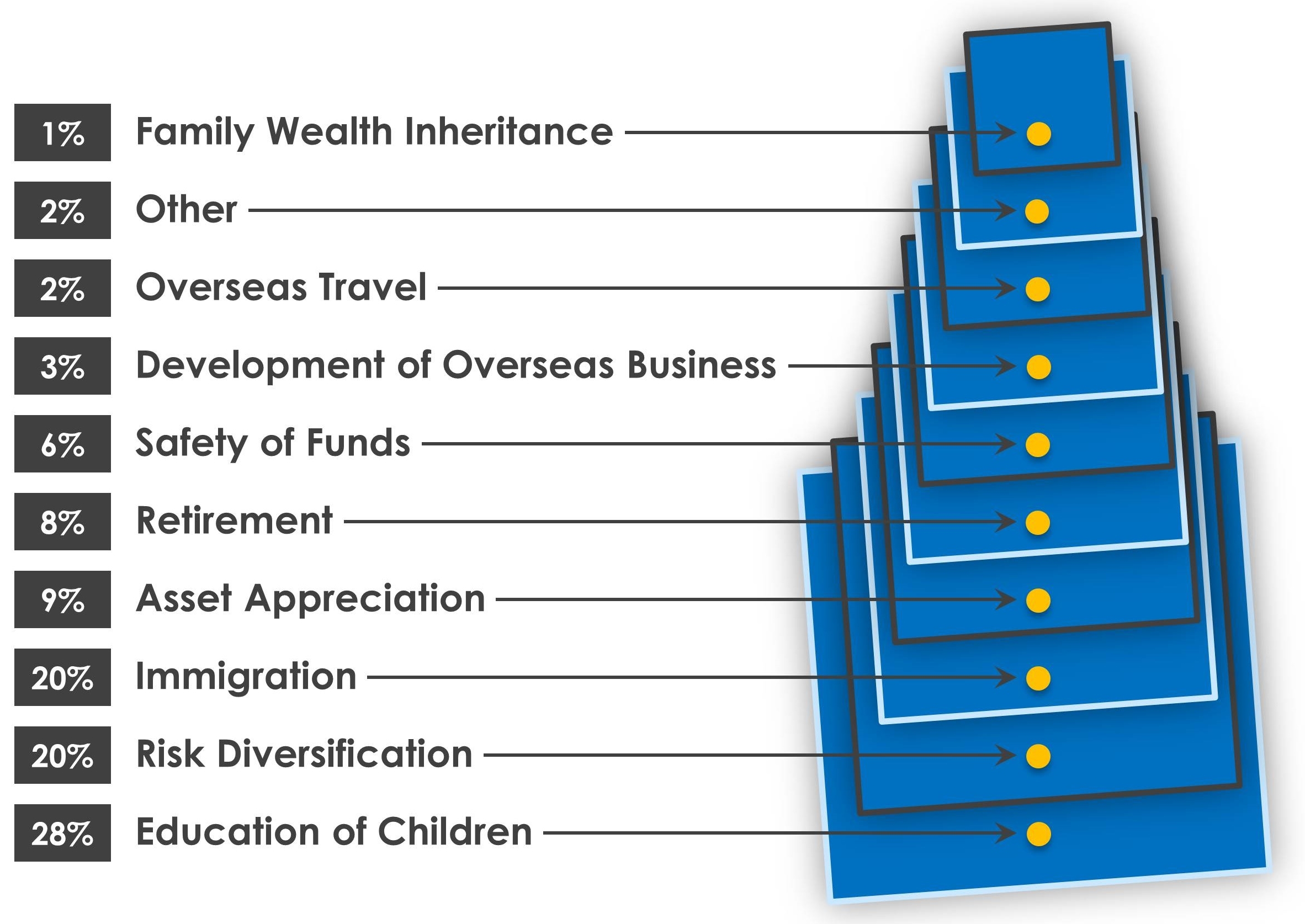 As it turns out, quality education for children is the number one criteria for investing in assets overseas. More than 300,000 students from China are currently studying in the U.S., and many of their parents have considered or are considering investing in properties, businesses, or other assets in the U.S. Many Chinese families are also concerned with diversification of risk, seek better returns on their capital, or aim to safeguard their money.

Moving capital outside of China, however, has proven to be difficult. The government, in an effort to prevent money from leaking out of the country, has a limit of transferring $50,000 abroad per year, which offers Chinese investors little choice on where to put their investments or what they can spend their money on.

Most Desirable Types of Overseas Travel 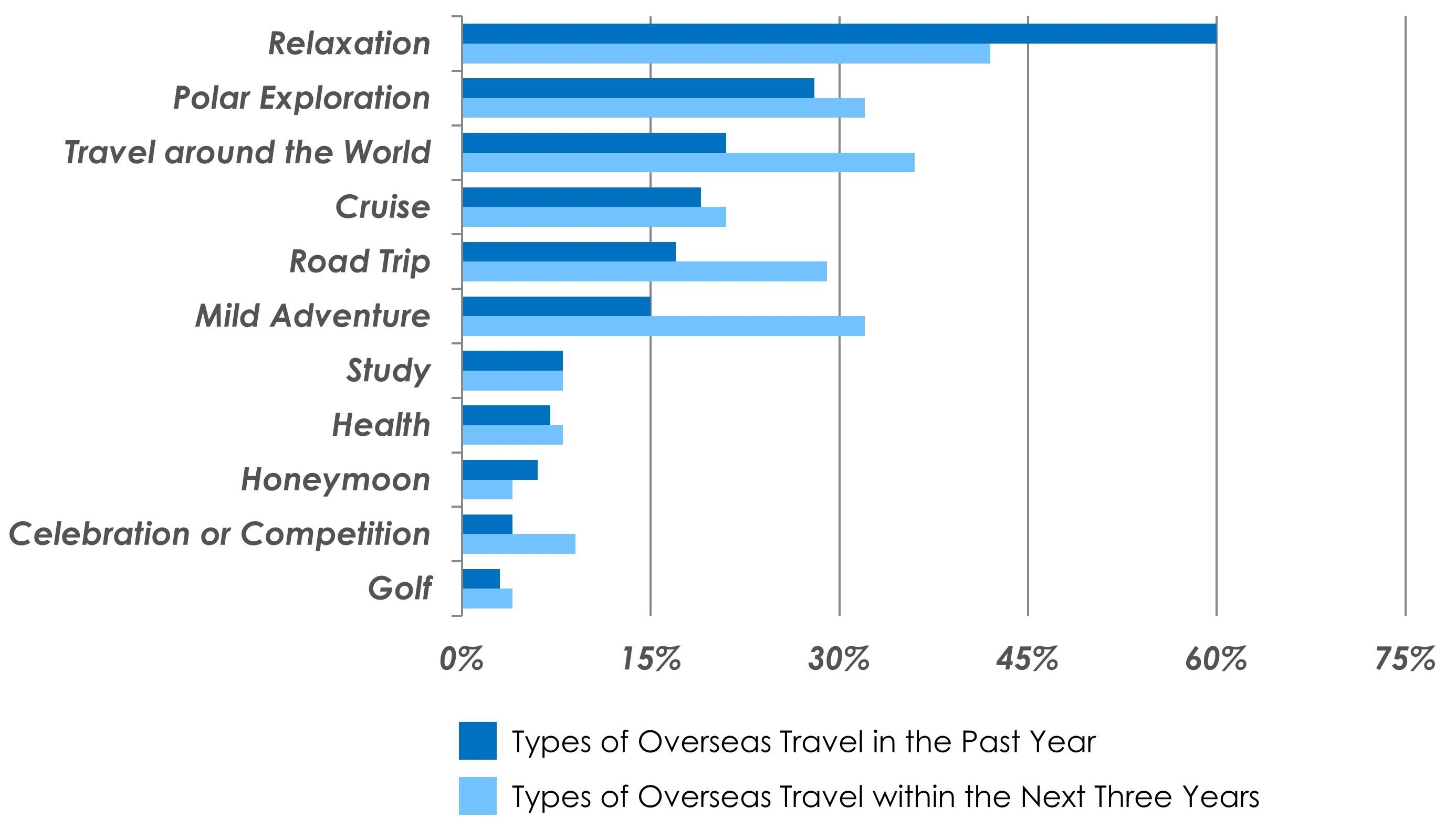 China’s richest jetsetters are increasingly searching for unique destinations and experiences as they travel off the beaten path and prioritize leisure over shopping. A 2015 report on Chinese travelers who spent $30,000 or more on travel over the past year (although the average amount spent among participants was $58,000) found that their preferences are unique from China’s mass travel market.

The North and South Poles were particularly popular and became a top destination among this elite group for holiday vacations. Known for their mystical landscapes, rare wildlife, and novelty, the Poles are catering more to an experienced group of travelers who can say “been there, done that” to the destinations most popular with China’s more than 100 million outbound travelers. 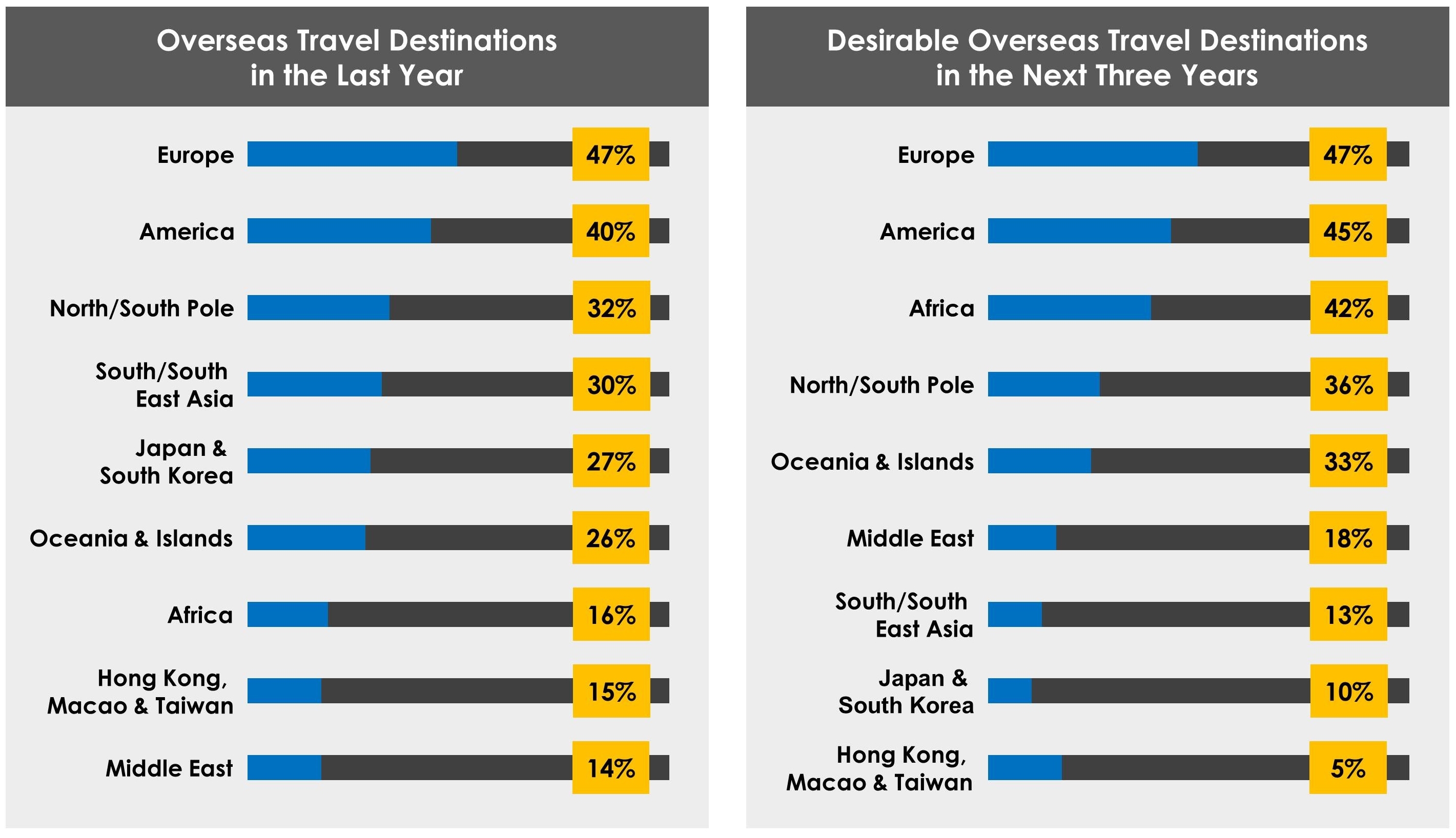 Since 2012, China has been the world’s largest outbound tourism market, according to data from the United Nations World Tourism Organization (UNWTO). The most popular destinations included Europe, America, and surprisingly, the North and South Poles. Tourists from China spent $129 billion abroad in 2013, more than any other market in the world.

A big component of Chinese tourism is shopping and luxury goods. Chinese tourists are known as the world’s biggest consumers of luxury goods. Sales to Chinese tourists in the designer outlets of Europe soared by more than 35% in 2014 and have more than quadrupled over the past 4 years. Over the next 3 years, it is predicted that Africa will become the 3rd most popular tourism destination since many luxury travelers seek to visit unique and undiscovered locales. 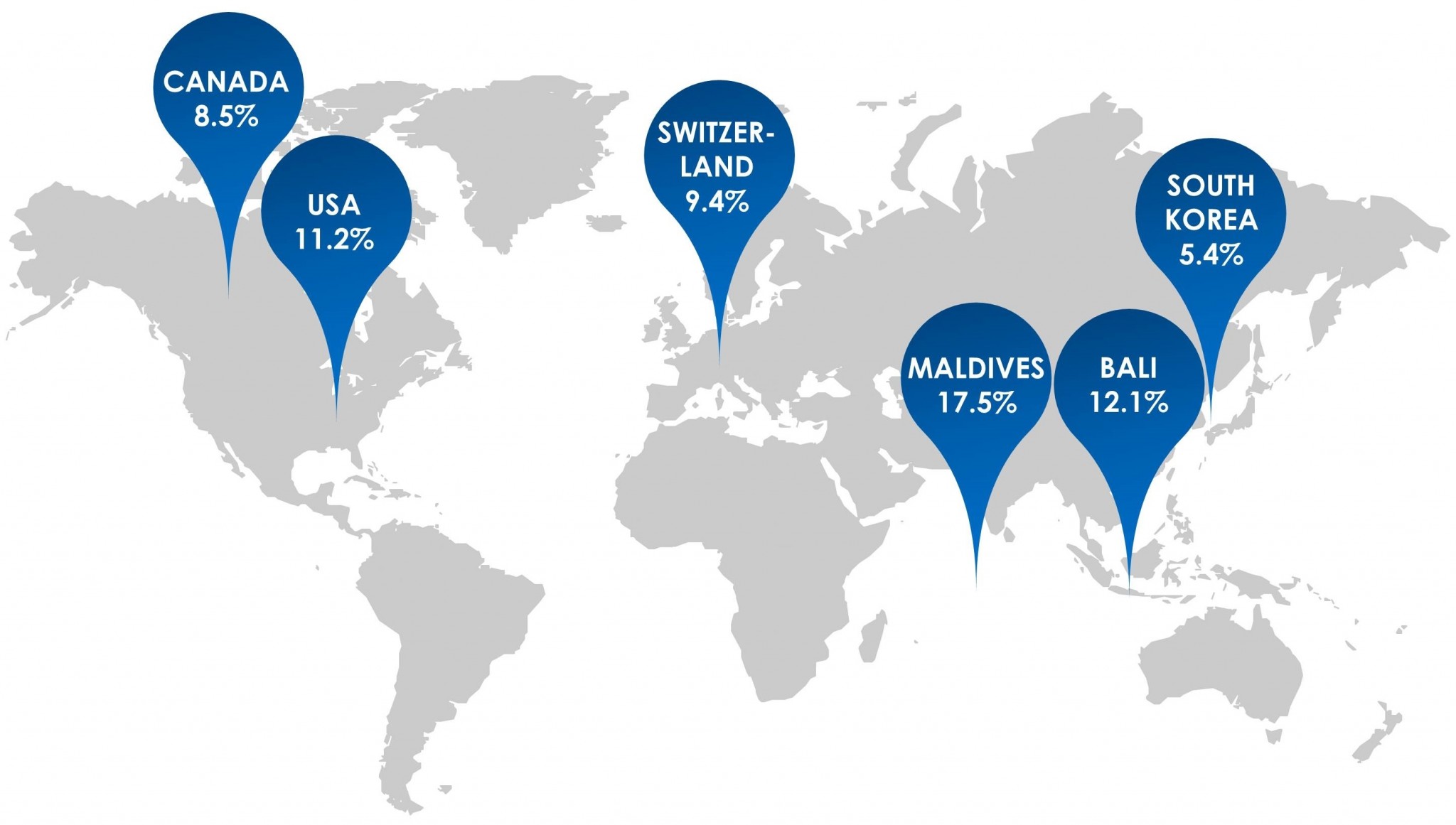 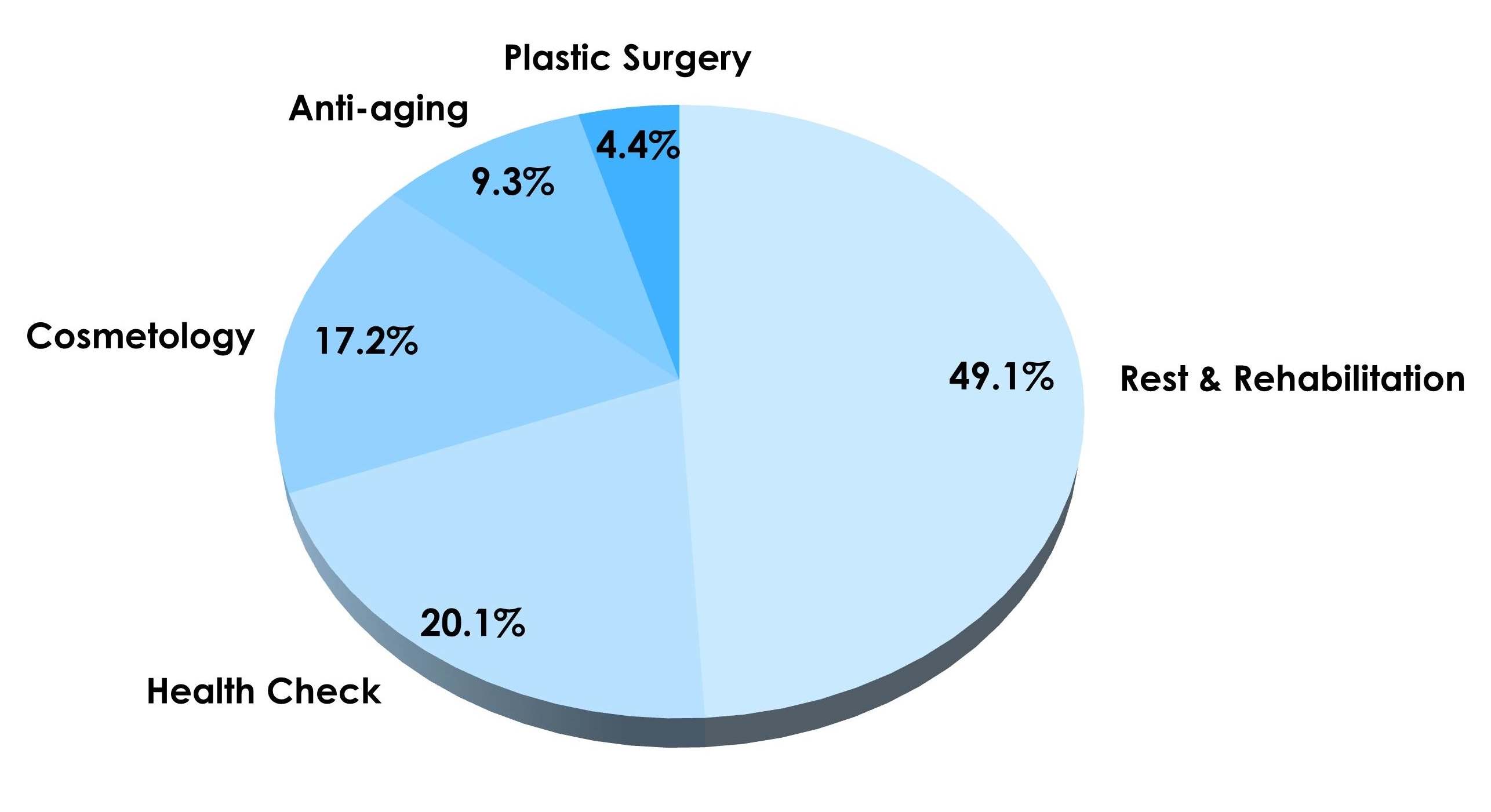 Fed up with mainland China’s crowded and noisy hospitals, a greater number of wealthy Chinese are opting to go abroad in search of better medical services. Many opt to travel in order to rest and rehabilitate from stressful jobs or to get away from the polluted air of China’s cities. Others seek medical check-ups at prestigious and renowned hospitals in the U.S. Some travel to countries like Korea to improve their appearance through cosmetic changes.

Top destinations for rehabilitation and medical treatment include the Maldives, Bali in Indonesia, and the U.S. Many factors influence the decision to rehabilitate abroad, which include cost, distance from China, and the availability of specialized treatment. 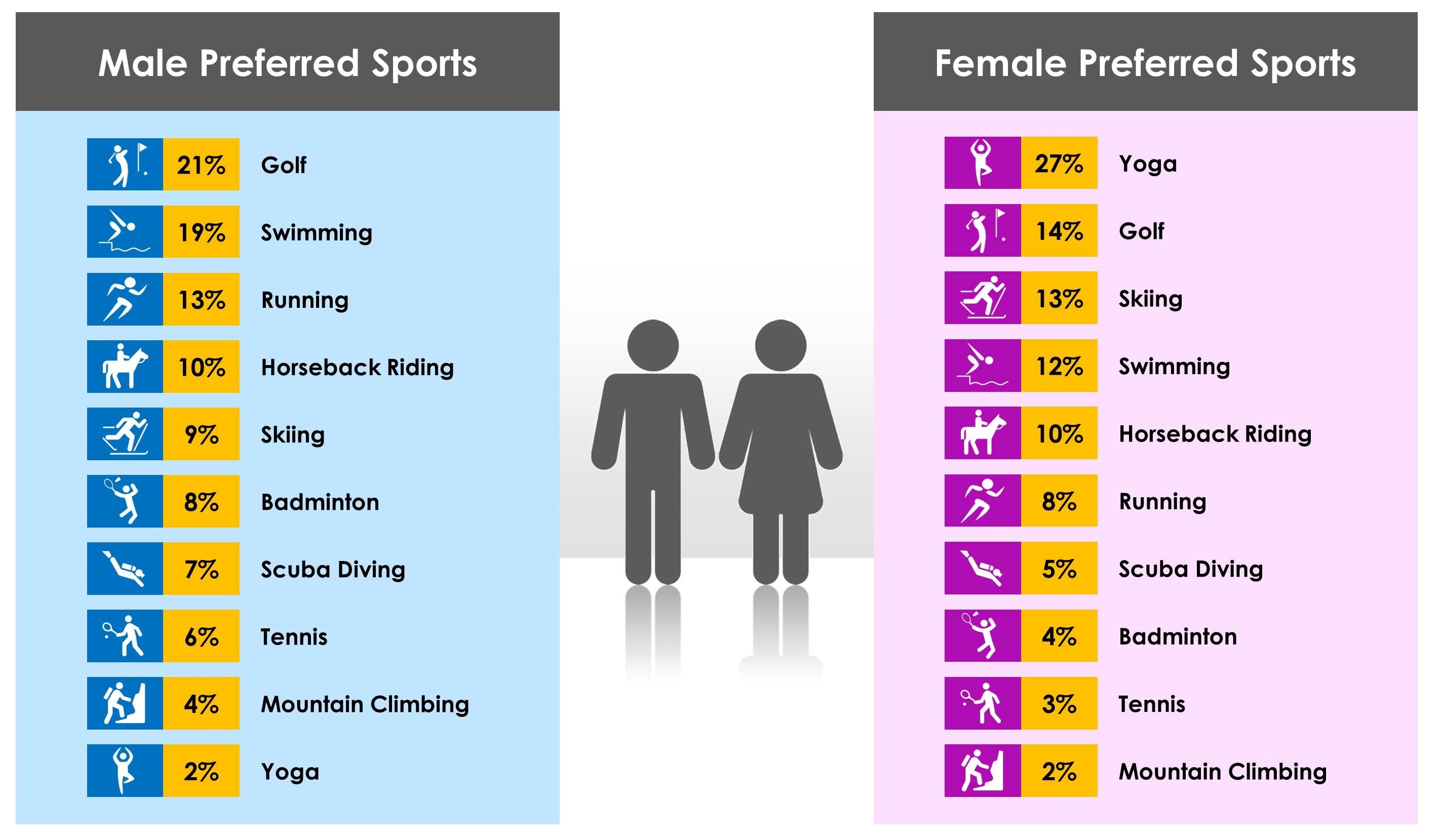 Sports are becoming an increasingly important part of normal life for Chinese citizens. For males, a poll found the top 3 most popular sports to be golf, swimming, and running. For women, on the other hand, the top 3 were yoga, golf, and skiing. Many sports have not yet achieved a significant level of popularity in China, leading many Chinese nationals to travel abroad in order to do scuba diving, horseback riding, or golf while on vacation.

Furthermore, sports are becoming an increasingly important agenda for the Chinese government. In March of last year, the Chinese government announced its plan to improve the country’s outlook on sports, beginning with soccer. Recently the Chinese State Council drafted a soccer reform plan in an effort to decrease corruption, increase professionalism, and develop a regulated soccer business.