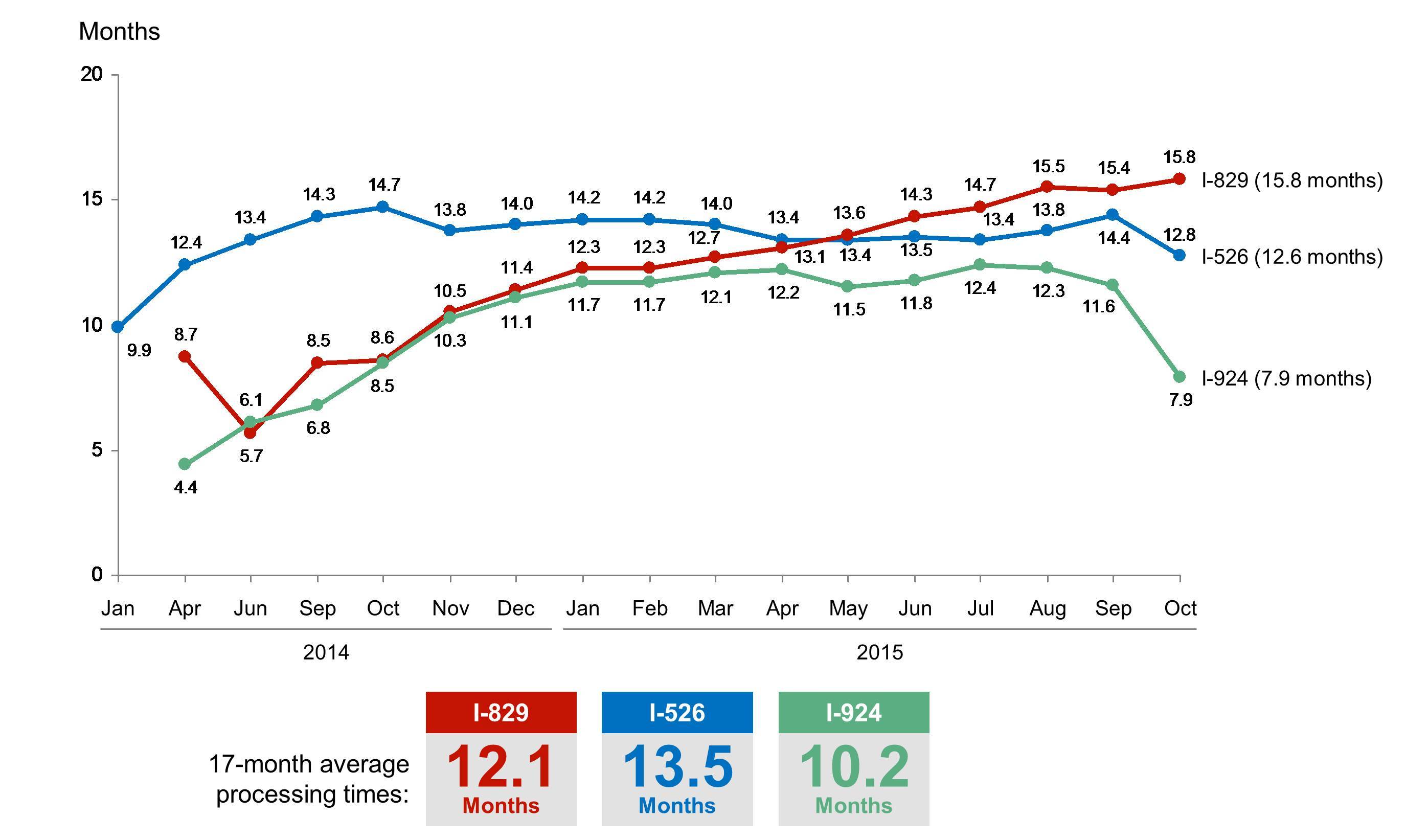 I-829 USCIS Form for Petition by Alien Entrepreneur to Remove Temporary Conditions
Based on the most recently released USCIS data, processing times for I-829 applications increased in 2015. According to the data, the average processing time for I-829 applications between January 2014 and October 2015 was 12.1 months. This increase was likely the result of a chain reaction or bullwhip effect caused by an increase in I-526 applications approved 2–3 years earlier that are now due for I-829 filings.

I-924 USCIS Form for Application For New Regional Center Approval or Project “exemplar” Status under the Immigrant Investor Pilot Program
Based on the most recently released USCIS data, I-924 processing times increased significantly in 2014 but have begun to stabilize in 2015, and they actually saw a significant decrease in processing time in October 2015. According to the data, the average processing time for I-924 applications between January 2014 and October 2015 was 10.2 months, which is almost 3 months above the most recently released monthly processing average of 7.9 months in October 2015. It is important to note here that USCIS does not segment out I-924 applications for new regional center designation from those I-924 applications that are for pre-approval of actual projects, or “exemplar” projects that are seeking approval by USCIS. These I-924 “exemplar” applications are submitted to USCIS without an individual investor attached to them, and so they are very similar to an actual I-526 investor petition—just without the information for an actual individual investor. Overall, it remains to be seen if this improved processing time is an anomaly or a trend that will continue into the future. If this is a trend of reduced processing times for I-924 applications, particularly I-924 “exemplar” project applications, this would be very positive news for the EB-5 community as many project-related milestones and key EB-5 lending provisions often include a project’s I-924 “exemplar” approval as one of the trigger points for the release of EB-5 funds out of escrow and into the project’s operational account—thus making EB-5 funding available sooner for project developers. 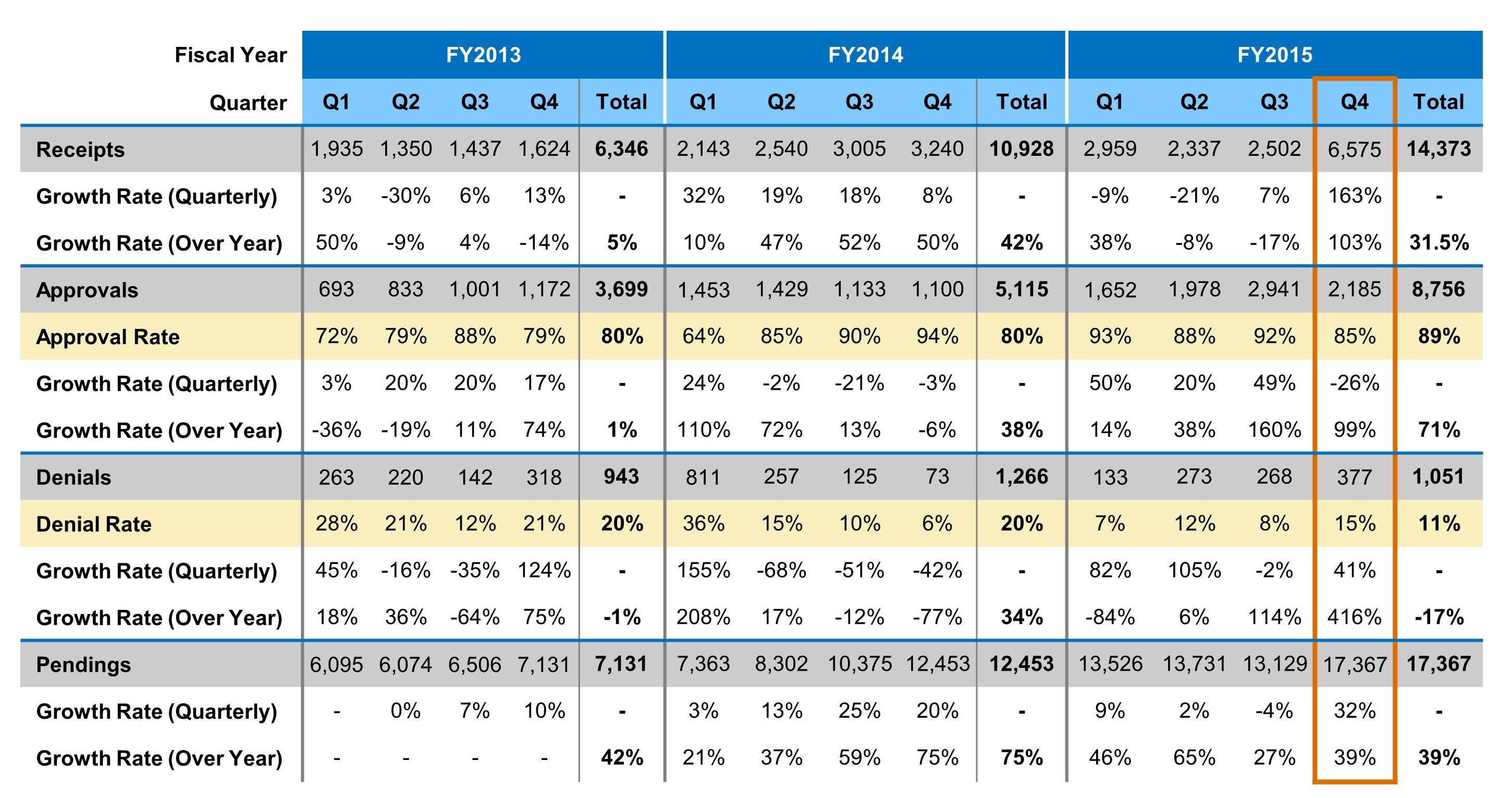 USCIS I-526 EB-5 Petitions: From the most recent USCIS data, it appears as though USCIS has begun to approve more new I-526 applications than it has previously. The I-526 denial rate has decreased from a rate of 20% in 2014 to almost half that figure at 11% in 2015. This decreased rate of denials is a signal that increasing I-526 application processing times may be starting to result in an increased rate of I-526 approvals by USCIS as the number of pending I-526 applications continues to grow despite increased numbers of USCIS adjudicators. The year 2015 saw a 31.5% increase in I-526 petitions submitted (14,373 total) to USCIS and an impressive 71% increase in the number of I-526 applications approved by USCIS. This large increase in I-526 submissions was clearly driven by both (i) an increase in popularity of the EB-5 program overseas, and (ii) a response to the anticipated legislation in Q4 2015 that was first expected on September 30, 2015, and again on December 11, 2015. The U.S. Congress ended up passing a 10-month extension of the EB-5 Regional Center program with no programmatic changes (e.g., minimum investment amounts, definitions for Targeted Employment Areas (TEAs), etc.) to the existing program for the duration of this extension. Going forward, all new I-924, I-526, and I-829 petitions will continue to be accepted and adjudicated as normal until a new EB-5 bill is passed, until another extension is given, or until the expiration of the EB-5 program on or before September 30, 2016.

More I-526 Applications are Pending Now than Ever 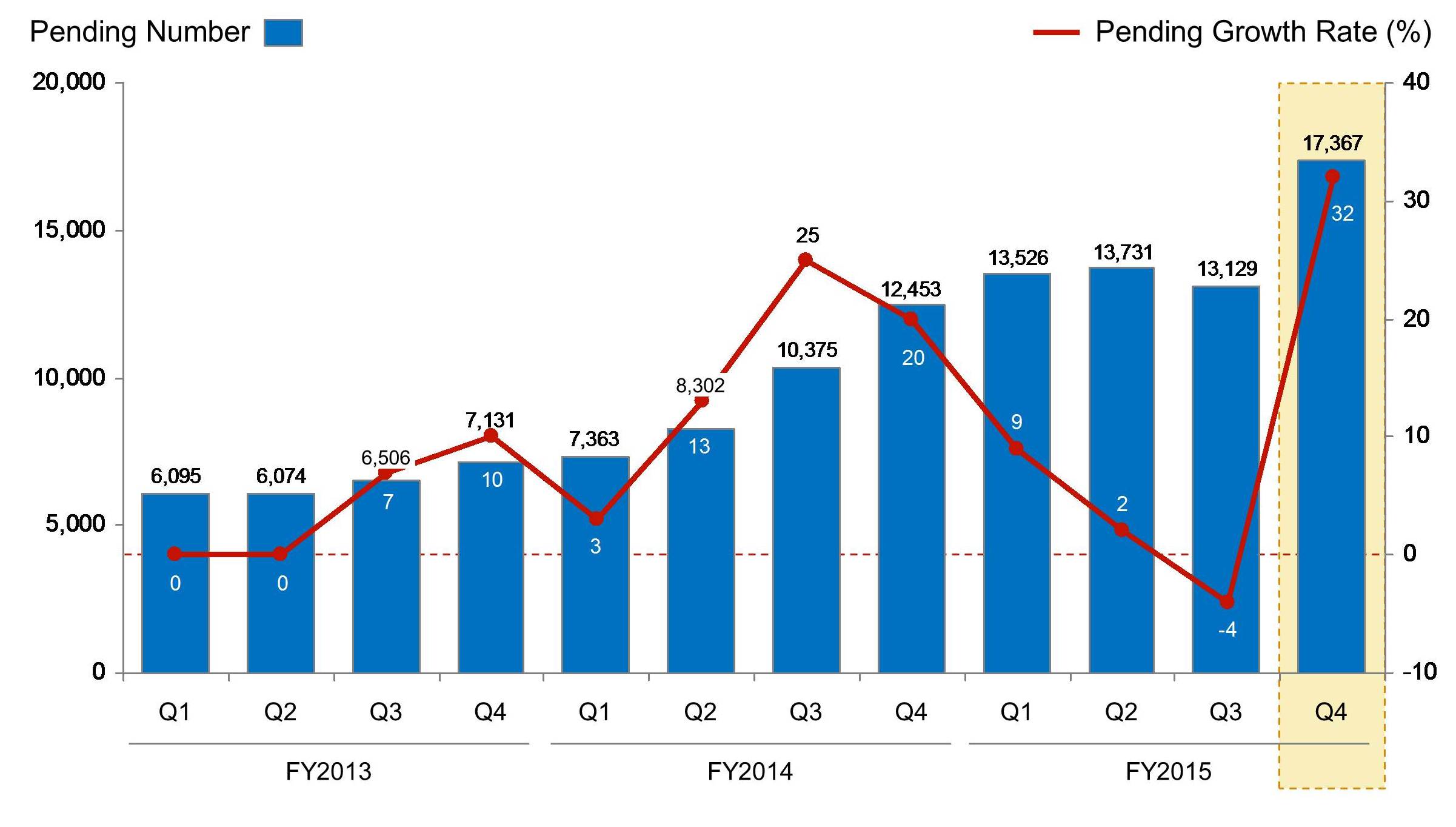 Pending I-526 Applications: The number of pending I-526 applications started to decrease in Q3 of 2015 as USCIS worked through their backlog of pending applications. In the final quarter of 2015, however, this number spiked as foreign investors rushed to submit their applications prior to the anticipated September 30, 2015, and subsequent December 11, 2015, EB-5 program renewal deadlines.

Visa Retrogression: With additional/expedited USCIS processing capacity still an open question, it is unclear how this large spike in new pending I-526 petitions will impact investors from China, who are already facing increased processing times due to visa retrogression. Demand from the Chinese market continues to outstrip the number of EB-5 visas allocated to mainland China, which has resulted in a significant pending I-526 backlog at USCIS. This visa retrogression issue, however, does not affect petitioners from other counties outside of mainland China, and therefore processing times for non-Chinese applications should be significantly lower than the reported USCIS average. In any case, EB-5 immigrants from all countries, including mainland China, can continue to file and obtain approval of I-526 immigrant petitions. In fact, filing an I-526 petition as early as possible is more important now than ever since it is the I-526 USCIS receipt date that is ultimately used for quota purposes and to calculate visa retrogression for Chinese applicants. 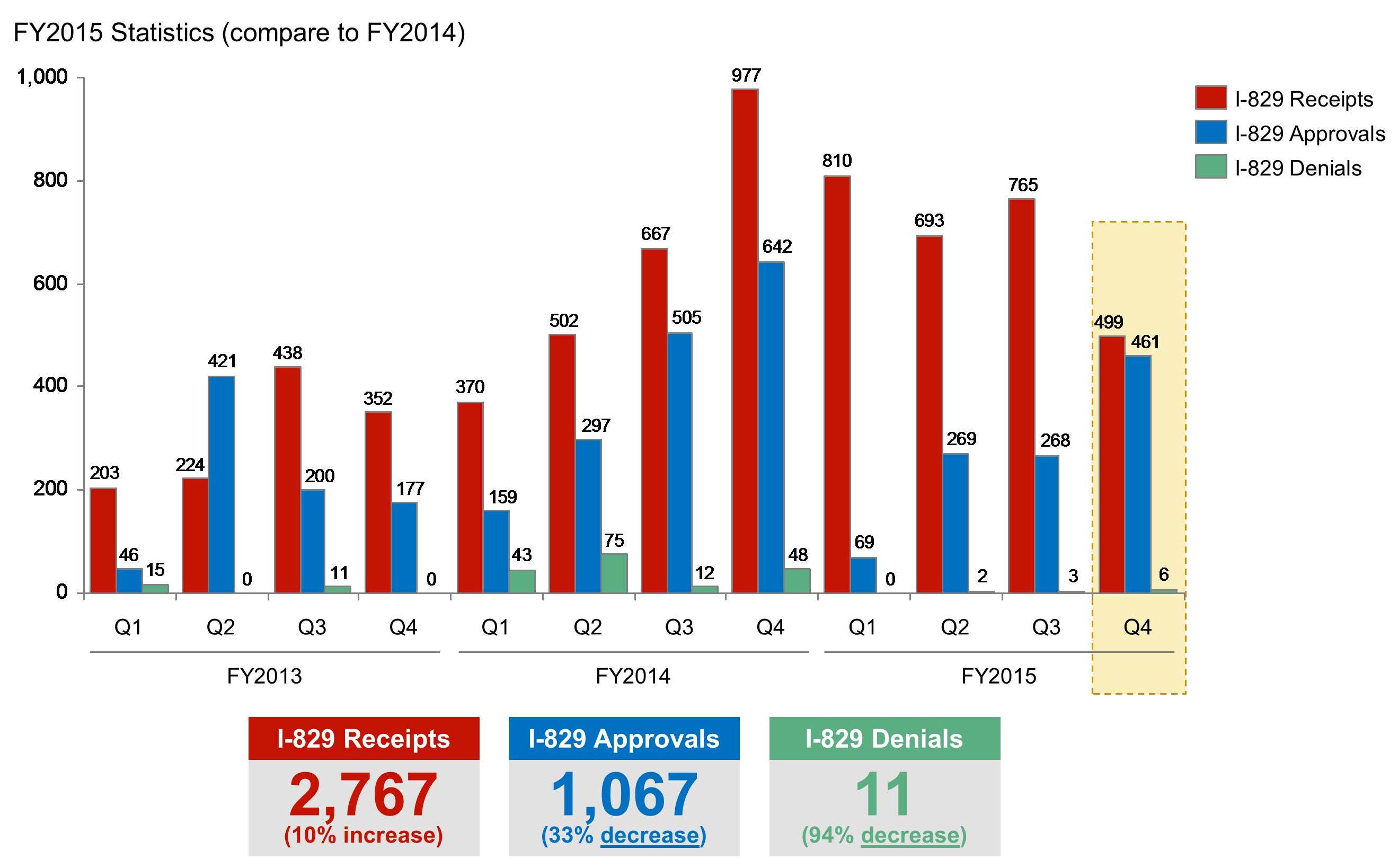 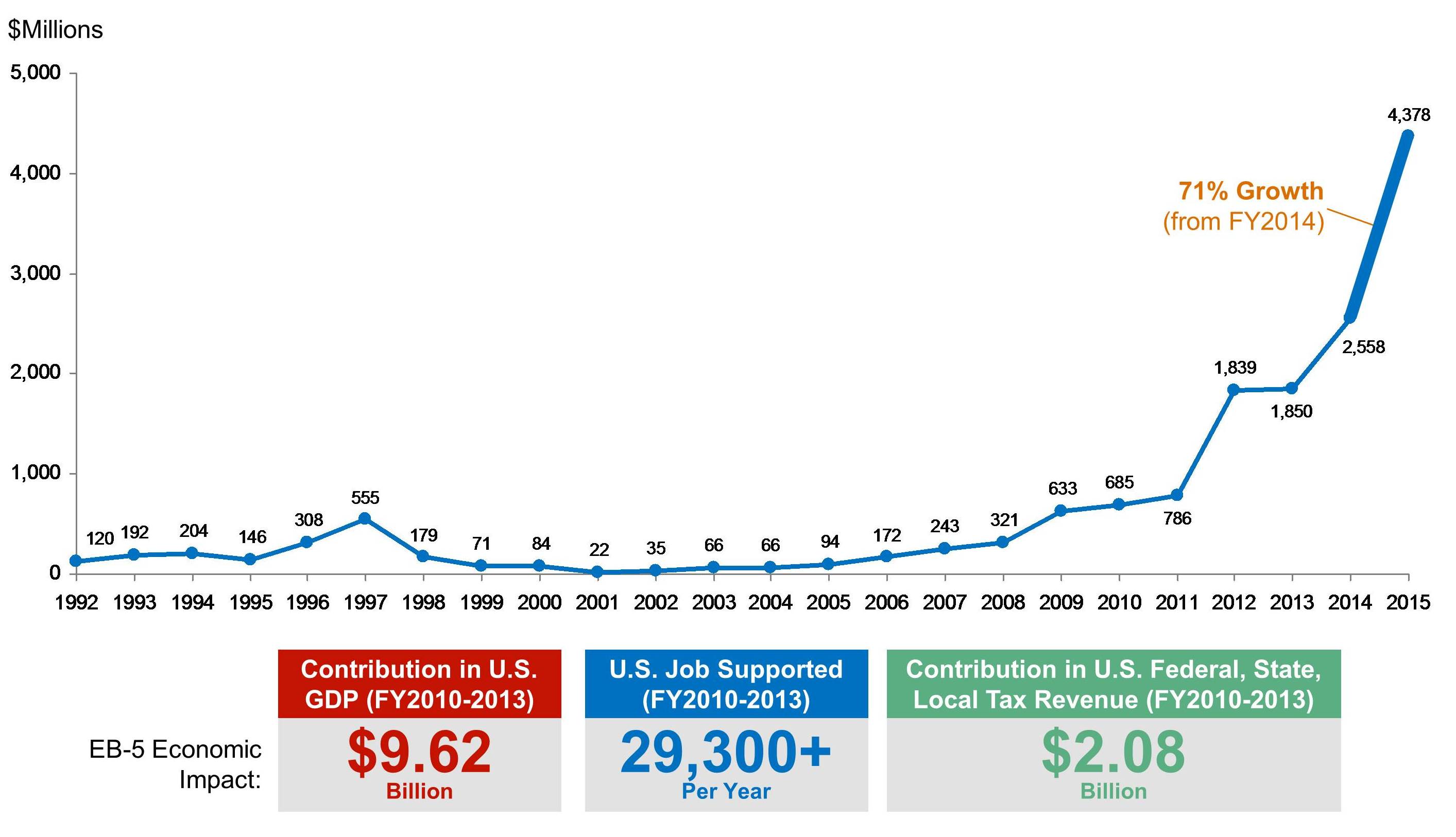 The rapid growth of the EB-5 Program in the past 5 years has contributed significantly to growth in the overall U.S. economy by significantly impacting new job creation, new business development, and increases in government tax revenue. Global interest in the EB-5 Program began to grow after the 2008 recession, when traditional funding sources became scarce. The program has exploded in the past 2 years as it has become more popular with foreign investors and U.S. EB-5 project developers. In the past year alone, foreign direct investment made possible through the EB-5 Program has increased a remarkable 71% from ~$2.6 billion to ~$4.4 billion.

According to recently released data, the EB-5 program has made the following economic impacts over FY 2010 – FY 2013:

For more information on statistics regarding the EB-5 Program please contact us today.