2020 was not a good year for participants of the EB-5 Immigrant Investor Program. It was not a good year for most inhabitants of the planet, as public life began to shut down and people were confined to their homes indefinitely. With shutdowns, lockdowns, and border closures, those who had made an EB-5 investment and were in queue to finally receive U.S. permanent resident status suddenly found their new life in the United States unattainable, with U.S. embassies and consulates temporarily ceasing routine visa services. Domestically, United States Citizenship and Immigration Services (USCIS) closed its offices to in-person traffic in the early stages of the pandemic, and the Trump administration enacted a year-long ban on most forms of employment-based immigration. It was a bad year for hopeful foreign nationals looking to forge a better life in the United States.

Most years, the country-based statistics of EB-5 visa issuances offers insight into what countries represent the highest levels of EB-5 demand, what share of investors from a particular country opt for EB-5 regional center investment, and how many EB5 investment participants from a specific nation obtained their EB-5 visa through domestic adjustment of immigration status rather than overseas consular processing. In 2020, the statistics are more representative of who was lucky enough to obtain a U.S. green card despite the mass shutdowns and processing bottlenecks due to the COVID-19 pandemic. 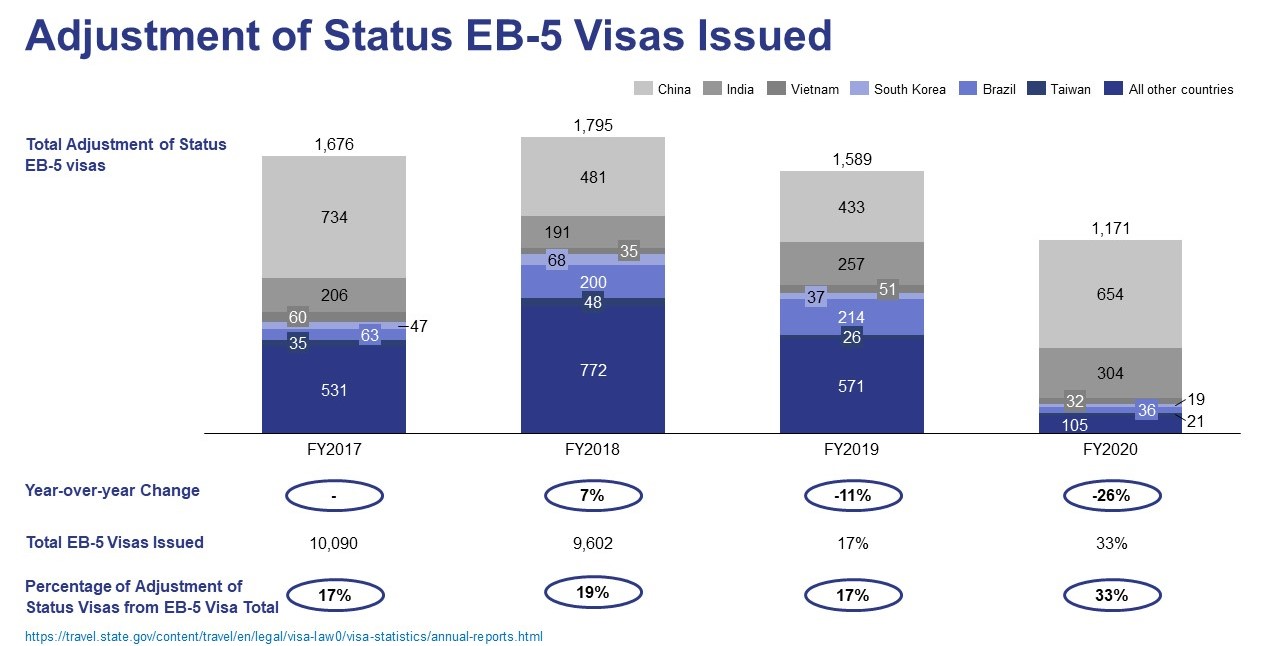 With consular processing effectively shut down for much of 2020, the door was left wide open to process I-485 petitions from domestic EB-5 investment participants to change their U.S. immigration status. With Charles Oppenheim, chief of the Visa Control and Reporting Division at the U.S. Department of State, declaring in November 2020 the existence of around 2,500 pending I-485 petitions just for Chinese applicants, theoretically, USCIS could have processed a maximum number of pending I-485 petitions to salvage as many allocated EB-5 visas as possible. But in practice, the immigration body failed to even meet FY2019 figures of adjustment of status EB-5 visa issuance.

I-485 processing for Chinese and Indian nationals was up, but only slightly. Across the board, other countries saw drops—such as Brazil, which fell from 214 in FY2019 to a measly 36 in FY2020. Overall, the number of adjustment of status EB-5 visas issued in FY2020 was lower than in the three preceding fiscal years, down 26% from FY2019. The percentage of adjustment of status visas among all EB-5 visas issued in FY2020 was indeed higher than previous years, but that was due to the overall lack of visas issued for EB-5 investments in FY2020.

So, what prevented the mass issuance of adjustment of status EB-5 visas in FY2020, when consular visas were all but impossible to grant? Given Oppenheim’s previous remarks, a depression in demand seems implausible. Rather, USCIS’s snail-paced processing speed is likely to blame, with slow Visa Bulletin movement the likely culprit behind the low number of Chinese EB5 investment participants receiving visas. EB-5 visa issuance has been on a downtrend trend since a high in FY2018, so the abysmal figures cannot be solely attributed to COVID-19. 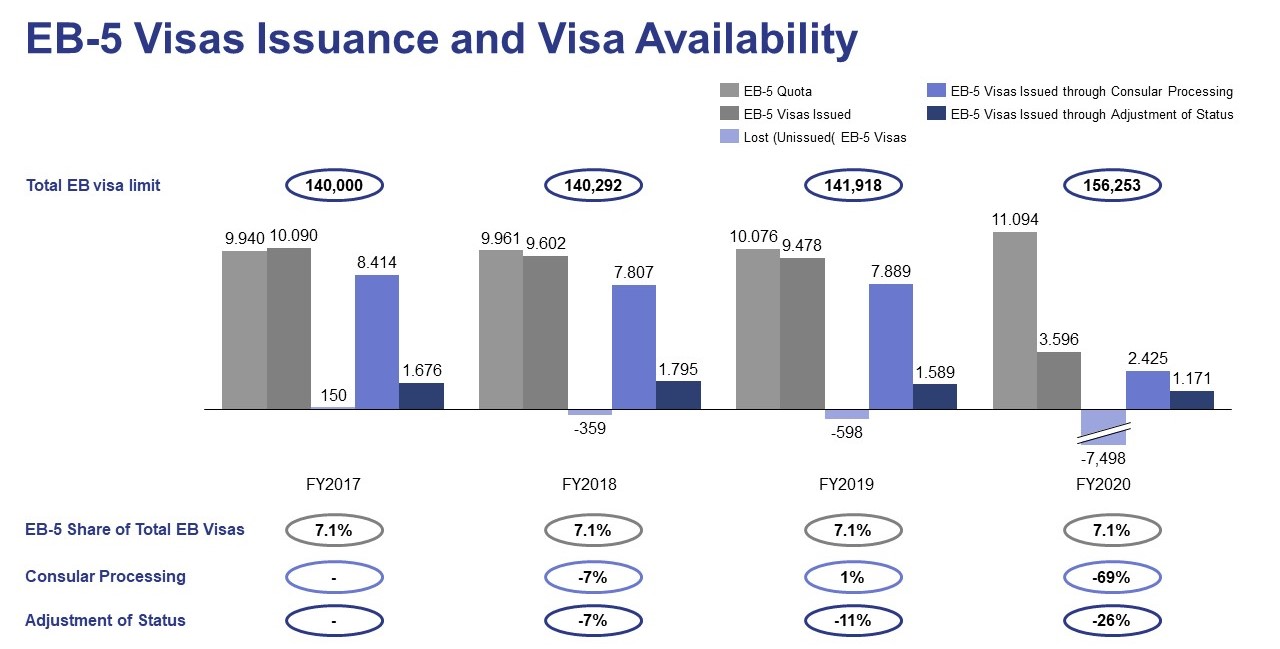 The pandemic’s dramatic effect on the EB-5 program can be seen in the overall number of EB-5 visas issued. Although the EB-5 program had more than 11,000 visas earmarked for it in FY2020—more than the previous three fiscal years—it issued little more than 3,500, letting almost 7,500 visas go to waste. EB-5 investment visas issued through consular processing dropped by 69% to around 2,400, while I-485-based visa issuance fell by 26% to around 1,100. The loss of 7,500 visas was offset by the massive gain at the beginning of FY2021, when unused family-based visas were recycled through the EB programs, granting the EB-5 program upwards of 18,000 visas—but with the pandemic still raging on in March 2021, whether those EB-5 visas will actually be granted in FY2021 remains to be seen. 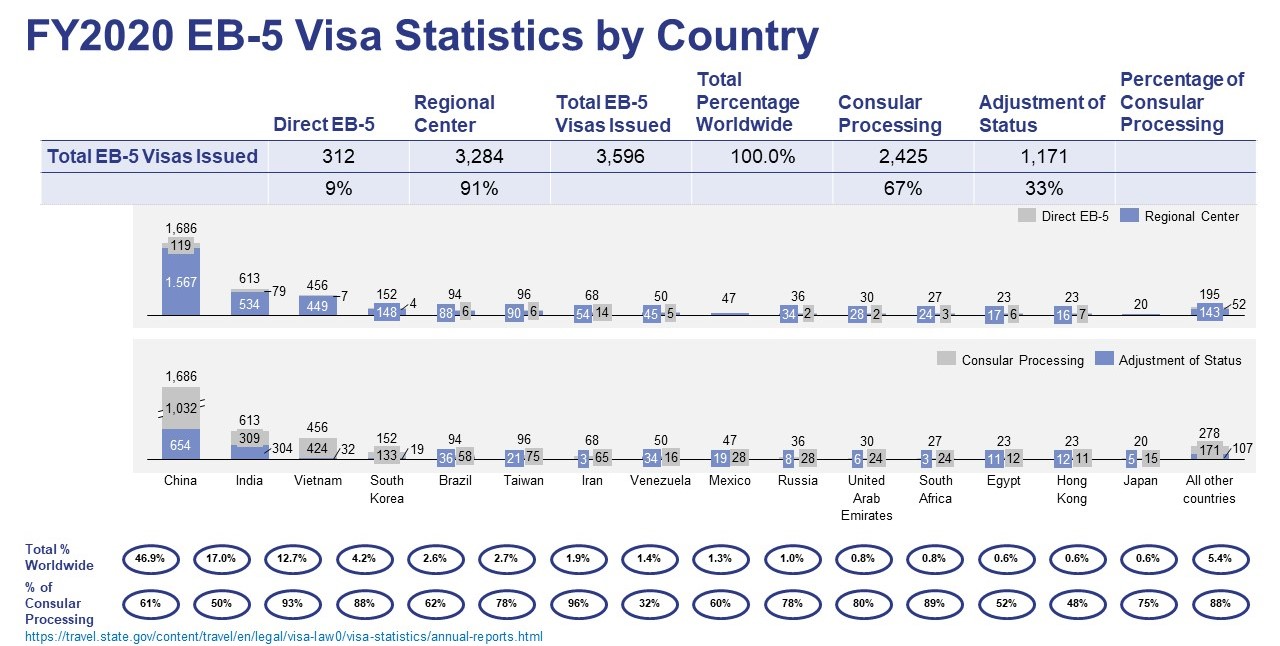 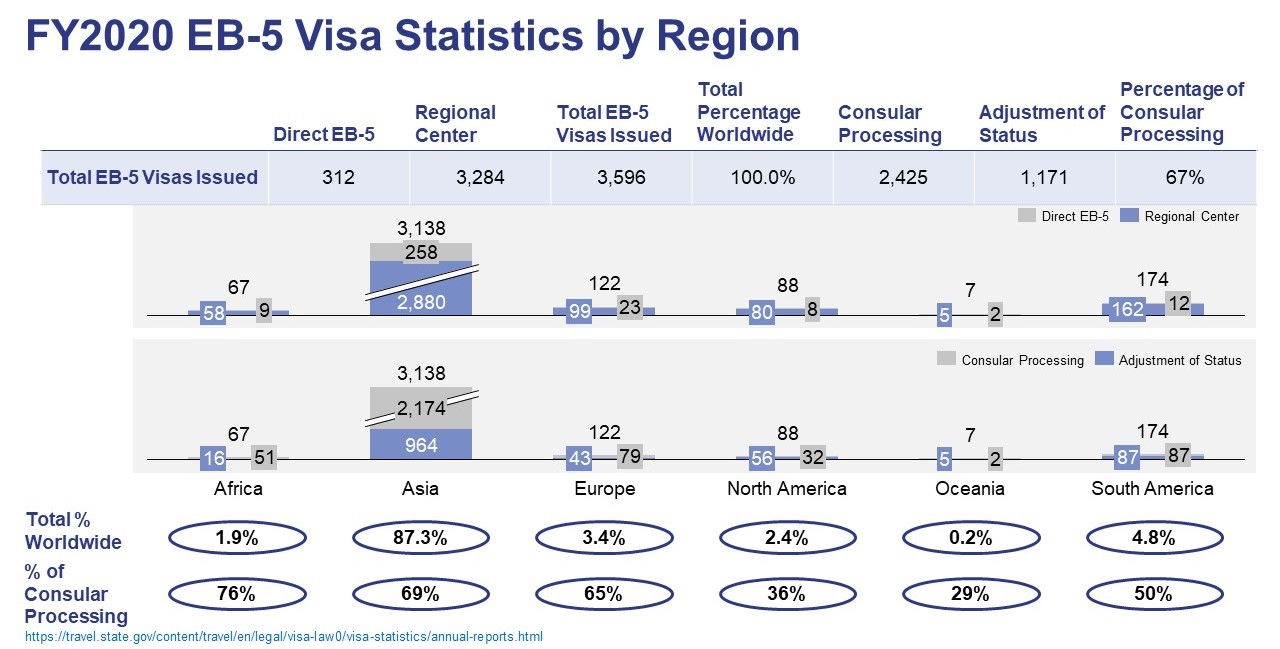 As usual, Chinese EB5 investment participants topped the country list in FY2020, accounting for more than 46% of all EB-5 visas issued in the fiscal year. India and Vietnam also accounted for sizeable portions, at 17% and 13%, respectively, and South Korea was next in line at just 4%.

EB-5 investment through a regional center remained the overwhelming favorite of EB-5 investors, with 91% of those lucky enough to receive an EB-5 visa in FY2020 having affiliated with a regional center. Of the 15 countries that saw more than 20 EB-5 visas in FY2020, two—Mexico and Japan—had no direct investors at all. Others, like Russia or the UAE, had only two. Direct investment seemed more popular among Iranian investors, however, with 14 out of 54 Iranian investors having made a direct EB5 investment.

The 2,400-odd EB-5 visas issued in FY2020 through consular processing are likely to have been distributed between October 2019 and February 2020, before the world shut down due to the COVID-19 pandemic. If the pandemic hadn’t struck and USCIS had continued processing at the same pace, the yearly total still would have only come to around 5,000, plus another maybe 1,500 resulting from approved I-485 petitions. At roughly 6,500, this still would have been the lowest number of issued EB-5 visas among the three years preceding FY2020, meaning EB-5 investment stakeholders would be wrong to direct all their ire toward the pandemic and its containment measures. Clearly, there also lies a problem with USCIS’s processing practices, independent of the pandemic.